Catching up in the Sunshine State!

It’s been a crazy month of travelling, and once again I find myself  in need of catching up with my blog….

First off, I would like to report that we were beyond pleased with how the Philippine Koi Show went.  There were so many challenges that had to be addressed since it was a new venue and most of us were flying in from abroad but with the help of our most capable staff and production team, as well as through the kindness and selflessness of so many hobbyists who dedicated so many resources, time and effort into the show, we managed to pull off one of our finest shows yet.  Everyone was so hyped after the show ( most especially me! ) that we immediately began the plans for next year’s Philippine Koi Show as well as the upcoming Kois & Ponds Grow Out Event! So many changes are coming and we are very much looking forward to bringing you a richer and more fulfilling Koi Show experience.

I’m currently in the process of writing an article about the Philippine Koi Show to share the event with everyone as well as to show our gratitude to so many people without whom the show would not be possible, so please stay tuned for that!

After we got back from Manila, I stayed home for about a day in the frigid cold tundra the Americans call Minnesota before flying to California to manage our warehouse.  The 2014 Koi Season is upon us and while it is coming a lot slower than anyone of us would like ( darn you, winter! ) we had to be ready for when it finally does get here.  Ten days later, I found myself back on a plane on the way to meet Devin and Shawn in Louisiana at Purdin Koi Farm.

It is always a joy to Bill and Maureen, but I was most excited to see Scott again! It had been nearly a year since we last visited, and everyone at Purdin Koi Farm had shown us an incredible amount of love and hospitality that both Devin and I had immediately fallen in love with Louisiana.  We harvested some of the Koi that Devin and I had culled through when we last visited and it was such a joy to recognize some of our favorites and see how much they’ve grown – and boy have they grown!

These fish, not even a full year old, had grown to look as if they were nisai Koi!  Devin and Shawn eagerly selected from the bunch and purchased some to bring back to each of their respective facilities.  I’ll be posting photos in another blog post so that’s one more thing to watch out for soon…. I didn’t realize how much I had to catch up on.. lol…

As were waiting for our flight back home ( to California / Minnesota ) in the Baton Rouge airport, Devin, Shawn and I chanced upon a surprise celebrity sighting! 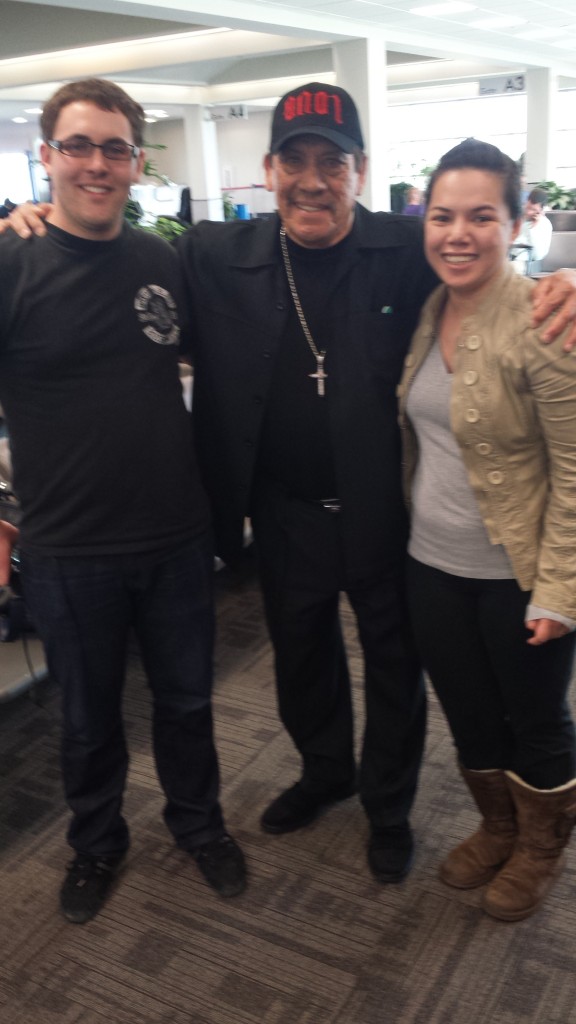 Do you know who that is? It’s Danny Trejo of Machete  ( the US version ) fame!  He was such a nice guy and so graciously took photos and signed autographs for anyone and everyone who approached him.  But his kindness of spirit was most apparent after he had boarded the plane.  There were a couple of lady passengers ( they were mothers, so don’t get excited boys! ) who had boarded the plane last and were having much difficulty finding a place to store their carry-on luggage.  Mr. Trejo, who was sitting in first class of course, stood up, started clearing some of the overhead bins above him.  He made space for one more luggage and personally took the luggage and put it up on the overhead bin himself!  Just goes to show that you’re never too famous or important to help out a fellow passenger. Thanks, Danny. 🙂

And now for today’s news…

Mike Sr., Devin and myself arrived just before noon in Florida so excited about getting away from the sub-zero temperatures of Minnesota.  Despite being greeted by more rain than we would like, we were happy to take the water over the snow.  We headed on out to the show site to greet everyone and attempted to get the booth set up and ready to go before sun down.  I promise you: one day it will happen, but unfortunately it wasn’t today.  There is such a long lull in between Koi shows during the winter that when the Central Florida Koi Show comes around, none of us can seem to tear away from playing catch up.

As I was hanging around waiting for Devin and my father-in-law from return from cargo where they were picking up their Koi, a felt a gentle nudge on my arm.  I turned around to be greeted by the smiling face of a tall gentleman.

“I know you!” he said to me with a mischievous grin.

Kevin Colopy from Happy Koi of Greenville has been believing in TOMiGAi Koi Food for the past two years now since my dad met him at the Greenville Show.  Since then Kevin and I have become great friends over the phone, but it was not until today that I had met him.  I was tickled with excitement! We didn’t have much time to chat as he was himself getting his booth set up, but they day was young still.

Bill and Maureen arrived sometime later in the afternoon and we all helped them unload their Koi.  Sometimes I’m beginning to feel like they’re our next door neighbors with the frequency that we see them – not that I’m complaining though! 😉

We had finished “sort-of” fixing the booth up by nightfall and as we were heading to our hotel we ran into the entire Colopy family.  They were heading out to dinner and seeing that we had no dinner plans at all and were already feeling the hunger pangs, we decided to join them.  We had finished our hearty dinner just in time to help Jim and Marge McManus unload their fish from their car and get them comfortably situated in their respective tanks.

Tired but happy, we headed on to get checked in to our hotel.  I’m so excited for tomorrow and hopefully I’ll have more pictures to share! Who knows, it might be of another celebrity sighting! 😉