Took me a while to get this blog post on, mostly because the photos that I took came from multiple cameras… and here is one of my favorite photos: 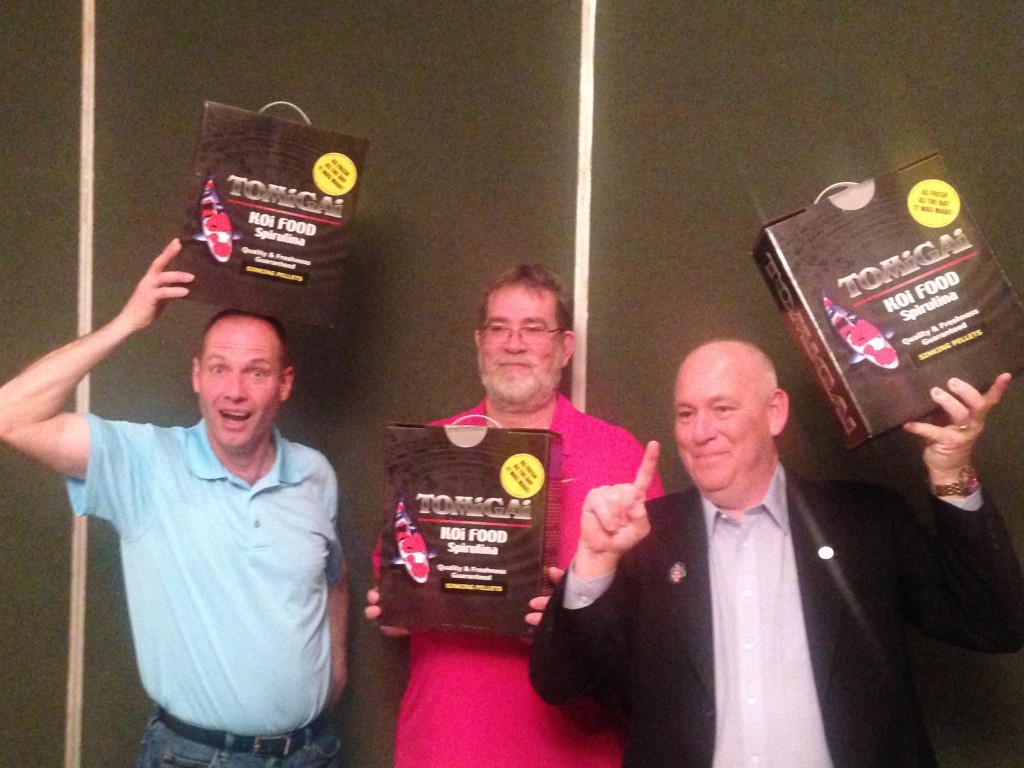 Love seeing everyone having fun with our boxes! 🙂

This year’s Koi Show was particularly interesting because, as I mentioned in the previous post, there was a judging seminar happening at the same time.  Koi Acres was asked to bring 5 Kohaku for their judging exercise and Devin really did a good job in bringing in some really nice Koi.  The Kohaku that he brought in were nisai Koi from Taniguchi – a small but quite impressive breeder from southern Japan.  We have all been pleasantly surprised at the incredible development of Koi from this breeder that I’m expecting to see more of his stock at Koi Acres pretty soon. 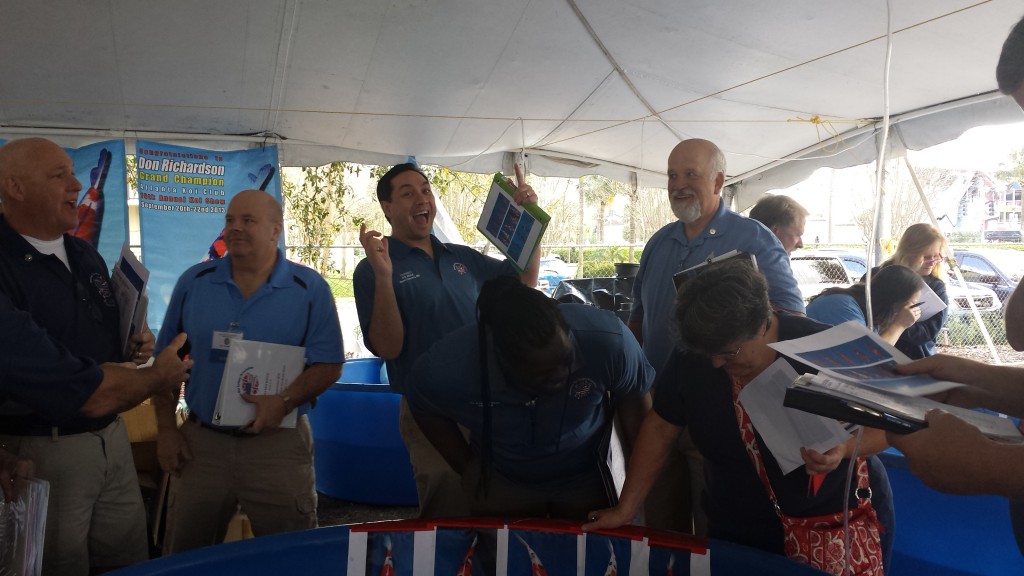 The Koi were ranked by variety and and overall Grand Champion and Reserve Grand Champion was also declared among all the Koi, and Koi Acres took the trophies for the two top awards.  Congratulations Koi Acres!

I was quite looking forward to this Koi Show weekend because it would be the first time that I would get to meet Kevin Colopy from Happy Koi of Greenville who is one of our TOMiGAi Retailers based out of South Carolina.  We had spoke often on the phone and he had first met my father, Michael, at the Greenville Koi show where my dad had judged a few years back.  Not only did I get to meet Kevin at the show, I also got to meet Tonya and their two lovely daughters Makayla and Anna.

There is always something interesting happening at every Koi show and it seems that no matter how well you think you know a person there seems to be no limits as to how they can surprise you, especially when they’ve got Koi in their blood.  This year was the first time for Paul and Kaitlin Korf to visit the Central Florida Koi Show ( Shawna couldn’t make it due to that silly little thing that always gets in the way of Koi called “work” ) and when I found out why they had come this year, I was particularly impressed:

“I asked Kaitlin to choose what she wanted for her birthday: a party or to go to the Florida Koi Show.  She wanted to go to the Koi Show.”  Paul related to me.  Girl after my own heart, Kaitlin.  Love you guys. 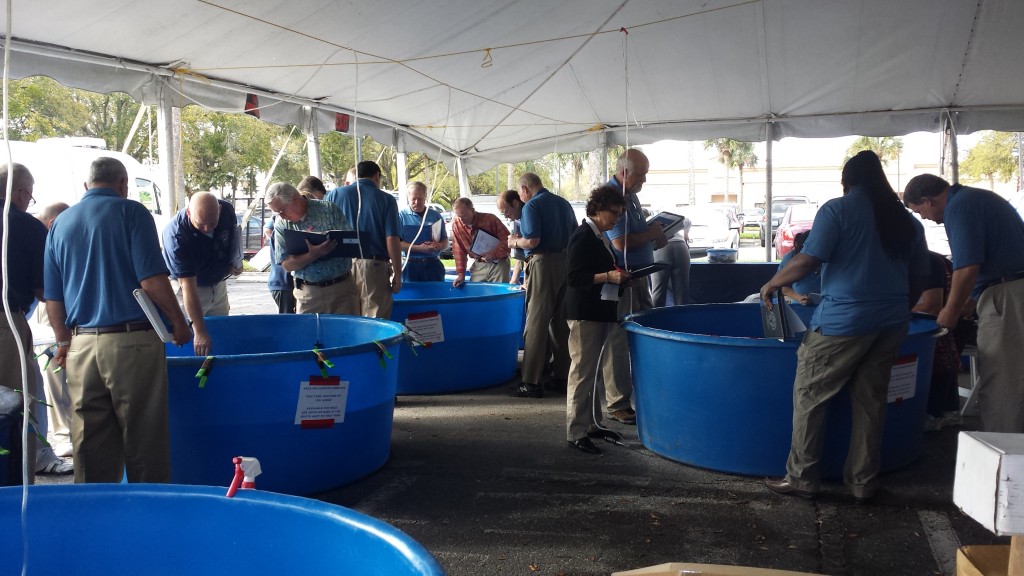 After the banquet on Saturday night, Jon Lottes from Anjon Manufacturing, Kevin Colopy, Matt Corino (Sugarloaf Koi), Father-in-Law Mike, Devin and myself found ourselves hanging out around the pavilion just before the elevators pulling more and more people to join our little gathering.  Before we knew it, we had about 20 people hanging out with us with the number steadily growing.  Suddenly I heard the big booming voice of Steve Childers coming from the entrance of the pavilion announcing something I found difficult to believe:

“Charles just went on the slingshot!”

O.M.G.  I couldn’t believe it.  For those of you who are lost, just around the corner from the show site, there’s a mini-amusement park that plays host to the world’s largest slingshot.  A couple of years back Devin managed to drag me into riding it and… well I just watched the video souvenir and it wasn’t pretty.  If you were to compare the video of Charles and Steve compared to mine, I was completely put to shame.  I screamed like a little girl.  ( Of course, it does kinda help that I am little…and a girl… lol).  Searching through my stuff, I actually found a copy of my video! For those of you who are interested in getting a good laugh at me:

Charles’ video totally puts me to shame.  This was taken a few years’ back – I think it was our very first trip to Florida.  I don’t think Devin and I were married yet, even.

I went up to Charles and told him, “Charles, you are like, my idol.”  I hope that I can still have that kind of energy and love for life as Charles has always. 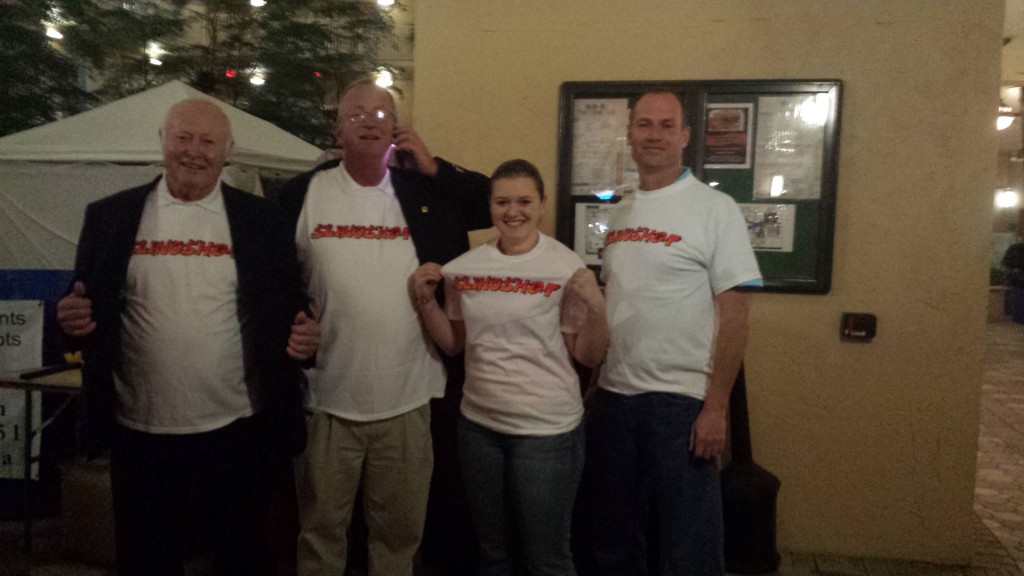 Since my dad wasn’t able to make it, he had asked me to take photos of all the major award winners.  Reluctantly (and with little choice), I agreed.  I had been around enough Koi photographers in my life to: a) Know to not get in their way and b) know it is no easy task.  I wasn’t too thrilled about it mostly because I knew nothing of how to do it.  Didn’t really help that Devin was completely unwilling (read: hungover) to help me take photos.  I was off to a rough start, but it wasn’t long before I found help in some friends.  I wanna say thank you so much to Cheryl Childers, Paul and Kaitlin Korf for so graciously helping me photograph all the Koi! I couldn’t have done it without you! I have to admit after reviewing the photos that I took, it’s nowhere near what my dad, Devin, Mark Gardner or Steve Gibbins status, but I did give it my best shot.  Steve Childers did give me some consolation though: “You tell your dad that your a much better photographer than he is.  You’re much better to look at!” lol… Thanks Steve! You really know how to make a girl feel good. 🙂

I’ll be posting the photos of the results in a separate blog post, so that I can have my dad go through them first to see which ones are the best, but before I do, I just want to say a big congratulations to all the show winners! Especially to Mike McMahon: not only for your dedication to the Koi hobby, but also for the tireless efforts you have been putting into the show all these years.  It was a well-deserved win.  Congratulations also is in order to Henry Culpepper and to all of the members of the Central Florida Koi Club:  once again, such a wonderful show and an awesome group of people!  Thank you so much for having us at the show!

Here is a rundown of the winners:

This weekend is the much anticipated ZNA So-Cal Show going to be held in Gardena, California, and both Devin and I are so sad that we couldn’t make it this year (curse you, overpriced airline fares!), but hopefully I can get my mom or my dad to write about it on the TOMiGAi Blog.  I heard that there are going to be some real ringers at the show this year especially since it’s a special anniversary show.  Good Luck to everyone!

Also, in less than a fortnight, Devin and I will be heading over to Japan for the Spring sale as well as to attend the wakagoi show and Tani’s Anniversary Auction Event.  I’m so looking forward to bringing everyone in on the ride! Until then…