Fresno Koi Show, Champion Fish, and the runner up to the “Little Pond that Could”

The photos from the Central California Koi Show in Fresno has recently been uploaded! To view the gallery, click here. When dad came back from the show, he had so many great stories to tell that I kinda felt jealous that I couldn’t come along for the ride. Congratulations to all the winners! 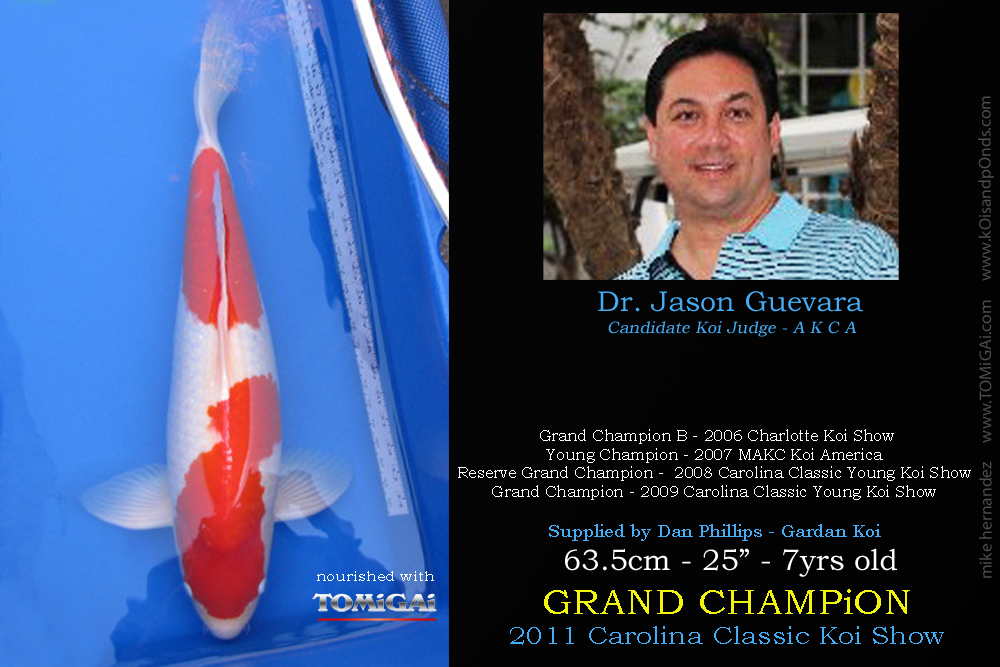 A few days ago, Dan had told me about an interesting fish that he had sold.  Rarely do you hear of a single fish that has won Baby Grand Champion <em>and</em> Grand Champion in its lifetime… twice! This weekend was the second Grand Champion trophy for this beautiful Niigata (breeder unknown) Kohaku owned by Dr. Jason Guevara at the Carolina Classic Koi Show, where it had won a few years ago.  What got me really excited was that this Koi is actually a <em>Male!</em>  Who says only females can win Grand Champion (except in the All-Japan show :P)? I would love to see this fish in person one day!

So, moving on, the story of my life continues…

After Devin finished work in Door County, we had one last stop to make before heading home: the suburbs of Chicago to see Tina and Tony Geraldi.  I was rather excited since I had yet to see Tony’s pimped-out pond. We arrived just before dinner and managed to make it out to the backyard before we lost sunlight.  Just like he said, it truly was a 1500 gallon pond.  Hence, Devin and I dubbed it the runner up to the “little pond that could”.  But don’t let looks deceive you as his filtration system was not only suitable for a pond at least 10 times its size, but it has all the latest and most advanced gadgets and gizmos you can imagine.  On top of that, he had less than 5 fish in the pond (I usually don’t count how many fish are in a pond…someone once told me it was bad luck when I was young and whether it is true or not, I have this tendency to avoid counting), which helps a lot.  And did I mention their awesome house? They have an awesome house.  😉 Really beautiful and very tastefully decorated.

Upon coming home, we were greeted with the numerous moving boxes that are still scattered on our living room floor. Thankfully we will be home for a few weeks-enough time, I hope, to make our humble abode actually <em>look</em> like an abode!  We are currently updating the koisandponds.com website, while still bringing the tomigai.com website up to date…. Thank you everyone for your patience!