“Devin, I’m ready! Wake Up! Lets go to Chicago!” I say to Devin as I squeeze into my summer shorts.  Devin lifts his head up from the pillow and I see his half-open eyes move towards my direction; his face wearing a completely unconvinced expression.

“Doesn’t look like you’re ready.  Wake me up when you’re actually ready.”

“But I am ready! I’m just trying to find comfortable bottoms for the car ride! Get up, Let’s go! I’m excited to get there!”

“Wake me up when you find your bottoms, which I am guessing is not anytime soon.”  was Devin’s response to my enthusiasm.

“Are you all packed?”

It was about 1:30 when we finally left our house in Lindstrom and nearly 2:30 am when we were finally on the road to Chicago with all the fish packed up and in the backseat of the car.  We were accompanied by Shohei, our guest from Takatsu Koi Farm, who was hopelessly cramped in the backseat, while tiny little 5’2 me got the lions share of the sleeping quarters in the Koi Acres truck.  As a victim of a “racing”wager that Devin and I had the night before, he had no influence on which seat in the car he would be accommodating for the trip.

Devin later told me that the route we took was riddled with road construction and caution signs, but all I remember about it was the dark and comforting back of my eyelids and the sweet sensations from the Land of Nod.  I know, I know, I am the best co-driver to be with ever.  Bar None. (No objections.)

We finally arrived at the show site at about 10:00 am, and I was grateful that this time our cargo was nearly half of what is the norm for Koi Acres.  A few filters, a couple of air pumps, some test kits, Koi Bags, other stuff and a whole lotta Koi Food made for the quickest and easiest setup time that I have ever experienced since I have met them.  I saved the Koi Food display for last as I knew I wanted to have fun with it; and fun with it I did have.

Devin and I decided we wanted to make a “TOMiGAi Display Tower”, so I began stacking up the food in a manner that made each variant relatively easy to grab, yet still resembling that of a “Tower”. We decided that a pyramid was the best way to go, so I put two layers of Tategoi and Taberu in the bottom, while the top four layers was a narrowing construction comprised of Wheat Germ and Spirulina.  This is what I had constructed: 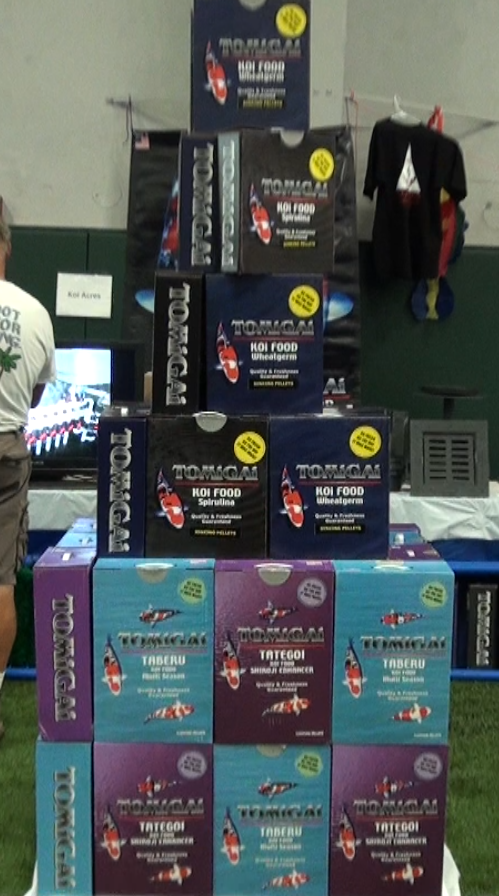 Devin had to leave shortly after I had completed the tower to help Tony Malone net and bag his fish.  After he left, Shohei told me that he had worked up an appetite, so we decided to take a late lunch break and headed over to the restaurant next door for a meal. After we had eaten our fill, we walked back to the show site and ran into Troy Head, Mike Pfeffer and Cheryl Carter in the parking lot just outside the venue.  We stayed and chatted a little bit (*wink*wink*) before heading back inside.  Little did I know that they had a little something up their sleeve!

Upon returning to the show site, I discovered that my little “TOMiGAi Tower” had come to life as it seemed to tower over (no pun intended) everything else in the room! 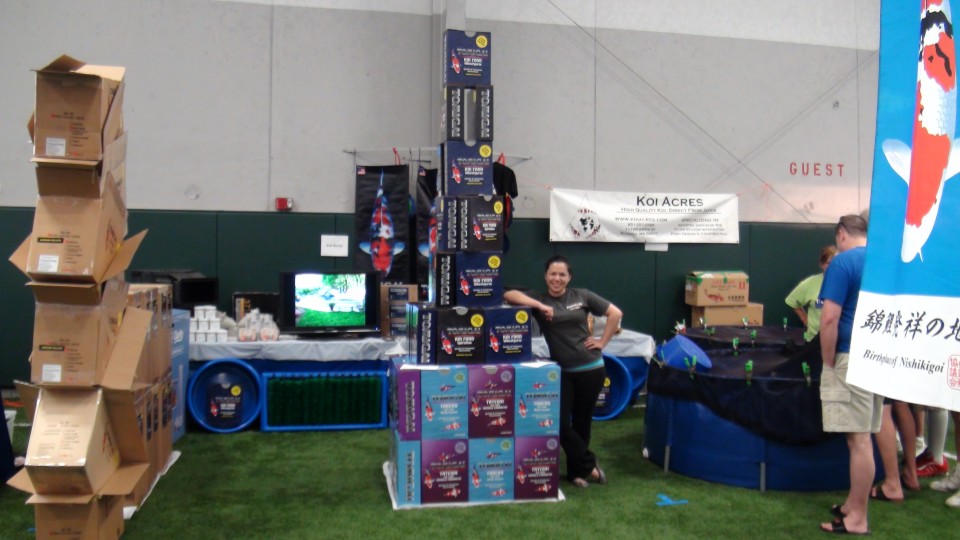 It had grown by over two layers, and didn’t stop there! Chris Carter and Troy Head had discovered as much joy as I had in the tower that they decided to “help” me build it even some more.  Together with Paul, Shawna and Kaitlyn Korf, it had grown not just into a tower, but into a living, breathing entity that had jars of Chlorine Neutralizer for eyes, a bag of Jalapeno Cheetos for a nose and 15″ Filter Brushes for arms!  It was not destined to live long, however, as Devin proclaimed letting it live would pose a great hazard to the lives of humans, so we had to put it down. 🙁

Throughout all this, the show benching team was hard at work ushering in all the Koi and preparing all the documents for the show.  Bryan Bateman is this year’s show chairman and together with his most endearing wife Bay, everything seemed to go smoothly and without any incident.  Paul Korf netted the fish that was to be benched while Kevin Karstens took photographs of the Koi.  Tubing and measuring the fish was tasked to Bryan Batemand while noting down the Koi information was fulfilled by either Bay Bateman or Shawna Korf.  The daunting task of running the show database was done through the tireless dedication of three most special ladies including Patti Gingrich and Carolyn Phelps.

It was a great day and because I had the chance to talk to many Koi friends, it seemed to go by all too soon.  By the time we had left the show site it was nearly 10:00 pm and our hotel was a half hour away still.  Our exhaustion and hunger had finally caught up to us on the drive to our hotel as the adrenaline of seeing so many friendly faces and talking about Koi simmered down.  We quickly grabbed a bite to eat and I ran up to the room so I can quickly write on my blog before the sandman caught up to me.

There is so much more I want to say, but it seems I am now being over run…. Gomen… I want to write more, but I suppose it will have to wait another day, because tomorrow… It’s Showtime! 🙂