There is probably only one country in the world where I could go on my tippy toes and actually touch the ceiling… I feel like a 5’10 model and I like it! 😉 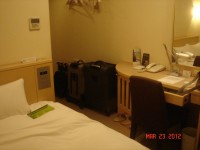 Photo taken from the farthest corner of our room.

One of the many things that Japan is well known for is the very tight hotel rooms that many business hotels have to offer.  At the moment, I happen to be staying at one in Hiroshima city so that we can be closer to the train station as we prepare to ride the Shinkansen to Niigata in the morning. While many may cringe at the thought of staying the night in such cramped quarters (and Devin mentioned that it might even be illegal in America to have two people stay in such a tight space), I rather enjoy it! 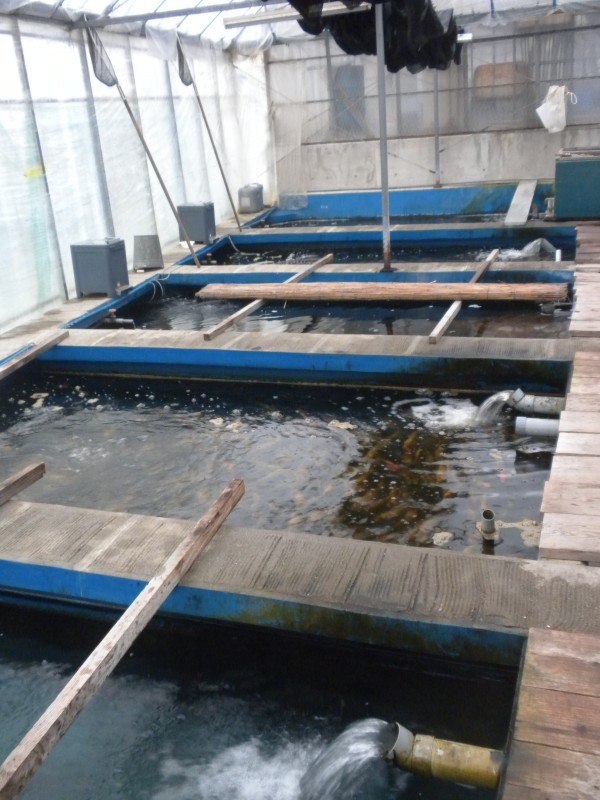 Some tanks at Omosako Koi Farm

Today we visited Omosako Koi Farm, and I have to say that the people there are some of the nicest people you will ever meet.  Devin and I were greeted by Takayoshi (the eldest son of Sacho) and his mother upon arriving at the farm.  Obachan (auntie in Japanese) was quite excited to see both of us, and myself in particular because it has been five years since I last came to Omosako.  The last time I visited, Sacho sent me out to go shopping and sightseeing with his youngest daughter Eri-chan.  So much can change in five years as we are now both married and Eri is now pregnant with her second child.  She was not at the farm when I arrived, so obasan promptly gave her a call and had me speak with her.  We were both so excited to see each other so Eri went out of her way to clear her schedule and we were once again reunited in a half hour.

She arrived with her tosai (one-year old ;-P) son, Gen-chan, and he is such a cutie!  She looked absolutely glowing and not at all like the five month pregnant lady that she is.  The nice thing about visiting Omosako Koi Farm is that pretty much all of Sacho’s children can speak English.  Hiro-san, the second son, lived in Seattle for some time while Eri lived, studied and worked in Australia for two years.  Needless to say, they are all highly capable of conversing in English. 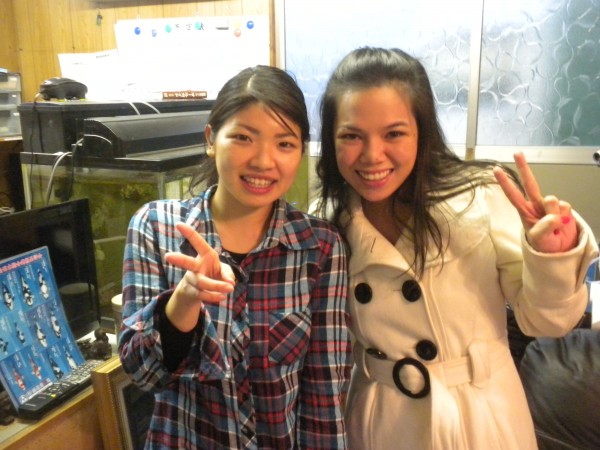 While Eri and I were catching up, Devin went ahead and picked out small tosai and Special Jumbo Tosai for Koi Acres to be shipped in April.  While they were taking photos of his newly purchased Koi, I slipped into the greenhouse and checked out his lot.  I expect that he will be posting photos of his Koi in a few days, so please look forward to seeing it soon! 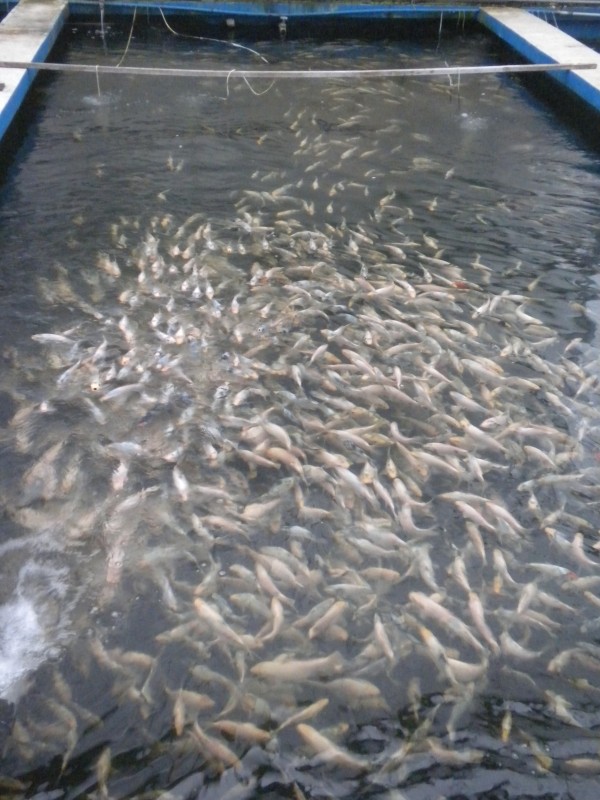 So many fish, so little time!

While Omosako has become renowned worldwide for his excellent Shiro Utsuris, he has in the past eight years begun breeding Showa as well, and they are turning out to be quite impressive.  The oldest son, Taka-san (Takayoshi), studied in Dainichi Koi Farm for quite some time to learn how to produce excellent Showa, as that is their specialty.  After having learned from the best, he returned to Kure (near Hiroshima) to apply his training and began breeding Showa eight years ago.

That is the interesting thing about the Koi industry: despite these farms technically being “rivals” with one another, they openly welcome and even share the secrets of one another’s farm with each other.  Many breeders send their sons to different farms to learn and train under another breeder.  Because Koi has such a personal touch to the method of learning, breeding and producing great Koi, it is such a surprise that such cooperative learning exists in this industry.  It seems that the progression and development of the beauty of Koi is more important than the promotion and financial success of an individual farm , regardless of which farm it is that is able to achieve such beautiful Koi. Camaraderie and unity on such a scale is extremely admirable and I am truly humbled and proud to be working in an industry that promotes this kind of harmony between breeders, dealers and hobbyists.

I asked Hiro-san if I could take some photos to share with all my readers, and he willingly gave us a tour of his facilities.  So many beautiful Koi! After we went through the Koi for open sale, he then took us behind closed doors to show us the very special stock… While the sights to be seen behind that door is something that I cannot share on my blog, there is one thing that I can tell everyone: Omosako Koi Farm can never disappoint and will always exceed expectations. 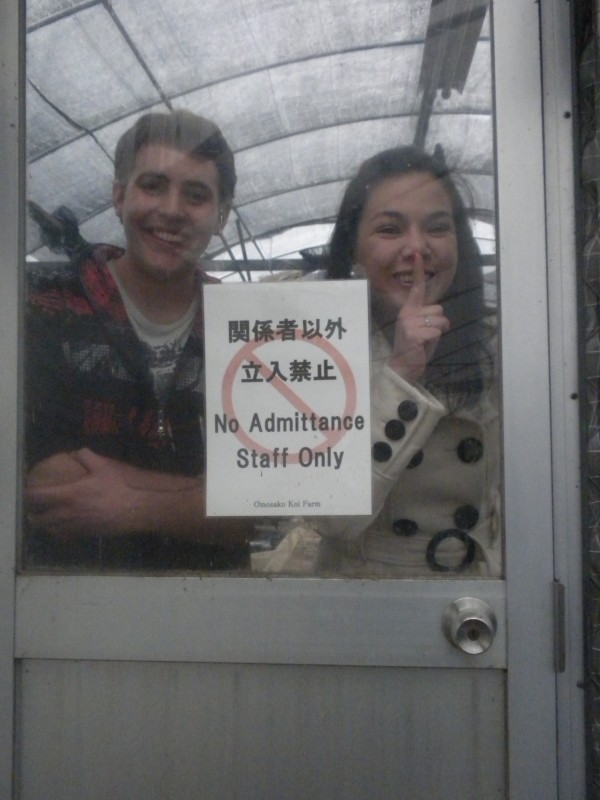 Going behind the scenes!

Devin and I weren’t the only people at Omosako Koi Farm that day as there were two other gentlemen present picking out Koi.  There we met Yamamura san and Shinsuke san, who used to work for Sakai Fish Farm in Hiroshima for about five years before moving to Thailand and started his own dealership.

Shinsuke san speaks quite good english as well, and when I met him, he said,”Mikki-chan, your father is Michael san from Kois and Ponds in Firipin (The Philippines)?”

“Yes! Hajimemashite! You know my father?“ I eagerly replied. It still surprises me how many people my dad knows.

“Yes, I met him in Sakai Fish Farm before.  I know him because he buys very good Koi, and he has a nice smile.” Shinsuke San replied.

There are quite a bit of perks to being the daughter of Michael Hernandez. It is quite flattering to be known, even more so because everyone seems to have nothing but good things to say about my father.

For the next hour and a half, the six of us, together with Taka-San and Eri-Chan talked, mostly about how different things are in different countries around Asia, such as Thailand and the Philippines.  It was such an interesting conversation that Devin delayed leaving earlier because we were having such a good time.  But we were slated to return our rental car by 6.30 pm and not wanting to have to pay an exhorbitant late return fee, we unwillingly had to cut the conversation short. 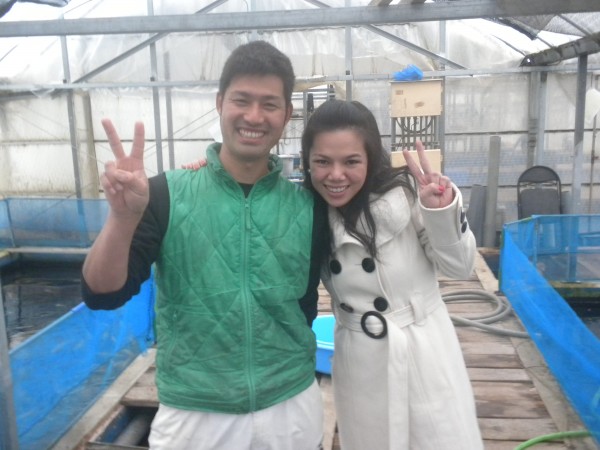 On the drive back, there was one last thing I had to do before I could leave Hiroshima area with a smile, and that was to eat Okonomiyaki! While I waited in our hotel room for Devin to come back after returning our rental car (thankfully, they didn’t charge him a late fee), I tried to calm myself down from becoming too excited.  We finally went out to eat dinner and I must say I was not disappointed! Perhaps tomorrow we can catch a quick lunch of another round of okonomiyaki before we head up to Niigata.

This trip is proving to be such an exciting one, and I am so happy that I get to spend time with all my friends here in Japan again.  I can’t wait to see everyone in Niigata tomorrow! We will be staying with Devin’s Japanese Family at Marudo Koi farm, and I hear the curry that Devin’s Japanese mom makes is the best ever… Yes, I am Filipino, and I love to eat! 😉