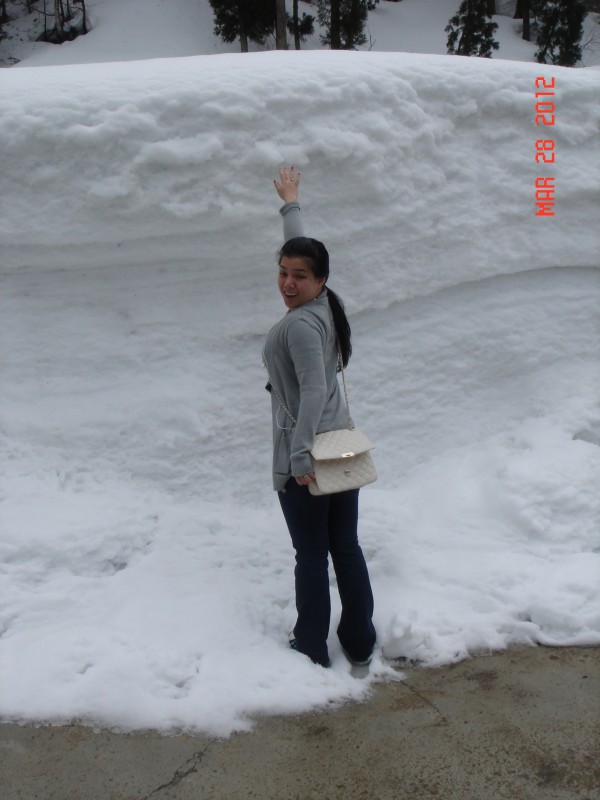 Yesterday was such a bright and warm day that I couldn’t help but be remiss in updating my blog and just enjoyed the weather.
The other day I updated my blog right after we returned from Kan’no Koi Farm selecting some special Jumbo Tosai Goshiki for Koi Acres.  I’ll leave it up to Devin to post the photos of all the Jumbo Tosai selected, but I will give everyone a sneak peek into the caliber of Koi that they can expect at this year’s Koi Acres Spring Sale.

I wonder who will be the proud owner of this fantastic Goshiki? 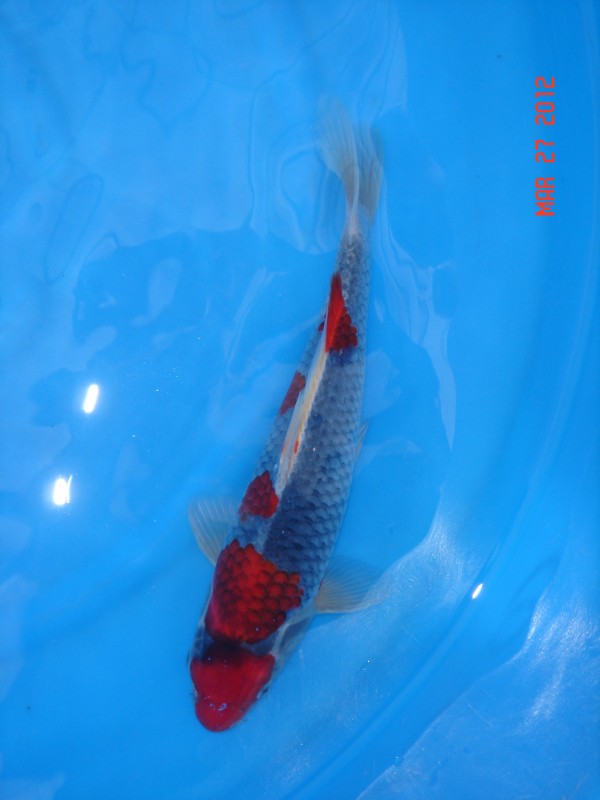 While Kanno is best known for being a Goshiki Breeder, it isn’t the only variety that he makes as he has recently invested a lot on very good Oyagoi to breed Showa and Sanke.  Devin and I took a peek at the tanks, and I managed to get a photo of the tategoi: 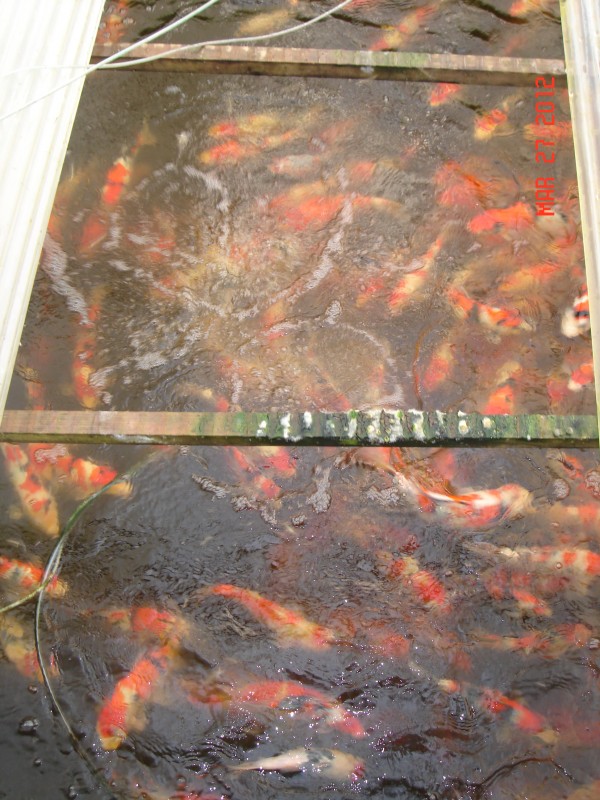 Did you see it? 😉 Unfortunately, without bowling any single fish and taking the time to photograph each and everyone, there is really no good way of photographing koi in a tank.  Sumimasen….

After visiting Kazu-kun (Kanno Koi Farm), we went to visit Mistunori Isa (Isa Koi Farm) and I was pleasantly surprised by a familiar face who was also at Mitsu-san’s brand new greenhouse when Devin and I arrived. Another Ikemen breeder with a million-dollar smile named Hisato Nogami greeted us with a warm handshake as we entered the building.  The new greenhouse is something anyone would envy as it had a state of the art heating system along with a much wider walking space in between tanks. Most definitely a luxury in Niigata.  They also housed pretty amazing fish as I got to see the Showa that won Kokugyo in the 50 bu division at all Japan Show this year.  I can’t wait to see this Koi again in a few years! 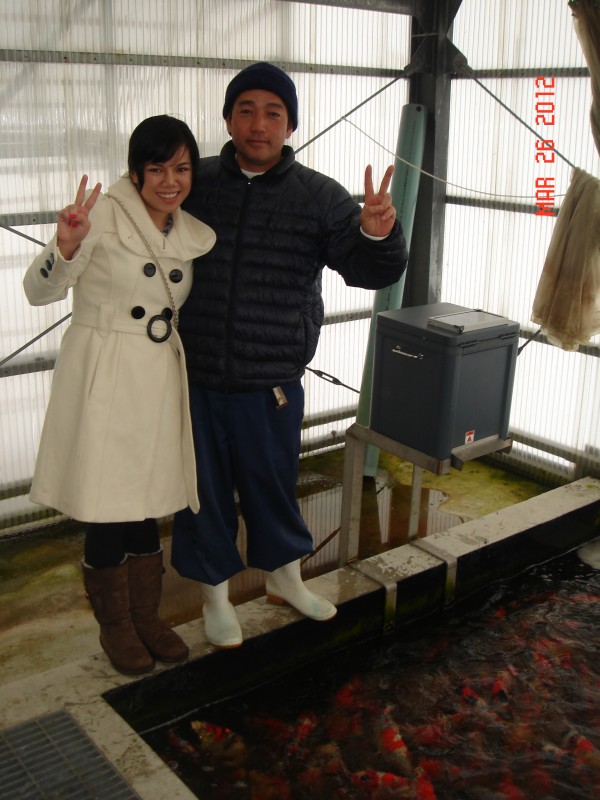 That night, Kazu-kun took Devin and I to dinner.  We had Okonomiyaki and Yakisoba, and I must say that it was most definitely the first time I had yakisoba that didn’t have the name Nissin in the packaging!  It most certainly tastes a lot different from the cup noodles, and while I absolutely loved it, Yakisoba cup noodles and I have spend many a late night together cramming for tests and college papers due in a few hours.

Speaking to young breeders is such a nice experience as there are many things we can relate to.  Devin and I are both young in the industry and Kazu-kun is exactly the same age as Devin.  There was much we could relate to and much we were able to share with each other about Koi and being in the Koi industry.  Kazu-kun would wake up at 5 am everyday in the Winter and 3 am everyday the rest of the year to go around his ponds (both indoor and outdoor) to feed and check on his Koi.  One thing we all agreed on was that Koi is most certainly a lot of work, and without passion, there is no way that we would still be doing what we are doing. 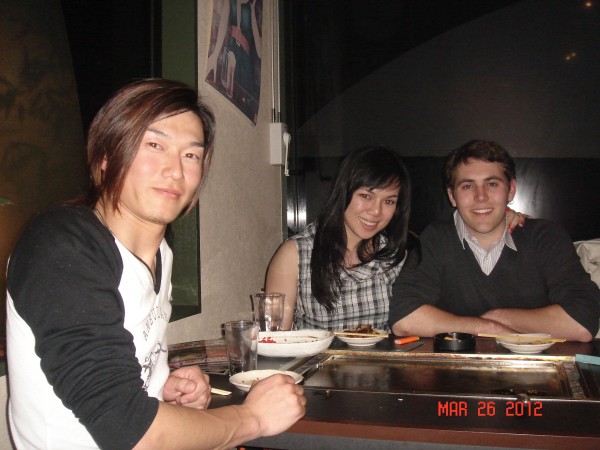 The following day, we were scheduled to return to Marusaka Koi Farm as Devin had still another fish to pick out, and this time I got to see more than just their beautiful Koi.

Marusaka mostly breeds Doitsu Kawarigoi, and in recent years this variety has grown in popularity.  I usually don’t see Midorigoi grow big, until yesterday.  Not only did this midorigoi have quite a bit of length to it, it also had a pretty good girth.  The skin was beautiful and even from head to tail, and the same shiny skin quality not only held true for this midorigoi, but for many of the Koi in each tank.  They also have some Sanke that is most definitely worth mentioning as the quality is quite impressive for them being a relatively smaller breeder.  Did I mention that Tero-kun also speaks English?

Apart from Koi, Teroyuki and his family are very much into bullfighting as a hobby, and I got to see the two bulls that they care for in the barn.  I was most certainly a frightening experience at first, but I eventually gathered enough courage to pet them.  Despite their imposing facade, they can actually be quite tame creatures (just don’t try to ride them like a horsie). 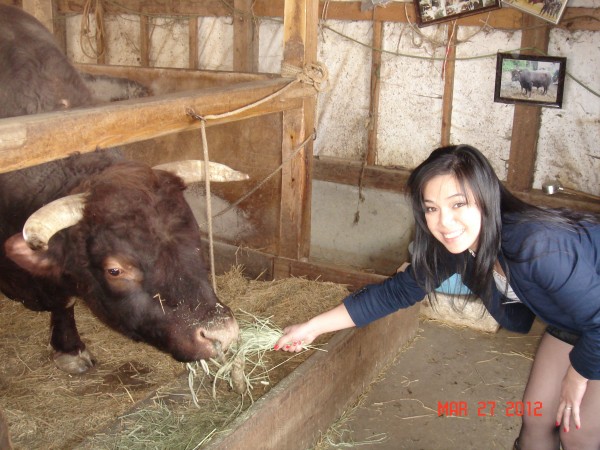 Teroyuki told me that he would take them out for walks when the weather is good so that they could get some exercise.  Apparently, bullfighting is quite a popular hobby in this area that walking  a seven foot bull like a dog is no big deal among the neighbors.  Wonder what my neighbors will think if I decided to keep bulls? 😉

Tomorrow morning will have a very interesting set of photos as today we picked out jumbo tosai from Marudo Koi Farm and Nogami Koi Farm and we got to spend some time with Hisato-san and his son Chikara-kun.  I would love to tell you all about it and show you more peeks in to the Spring collection of Koi Acres, but it is time to eat dinner and I feel it would be a crime to keep really really good Japanese Food waiting.