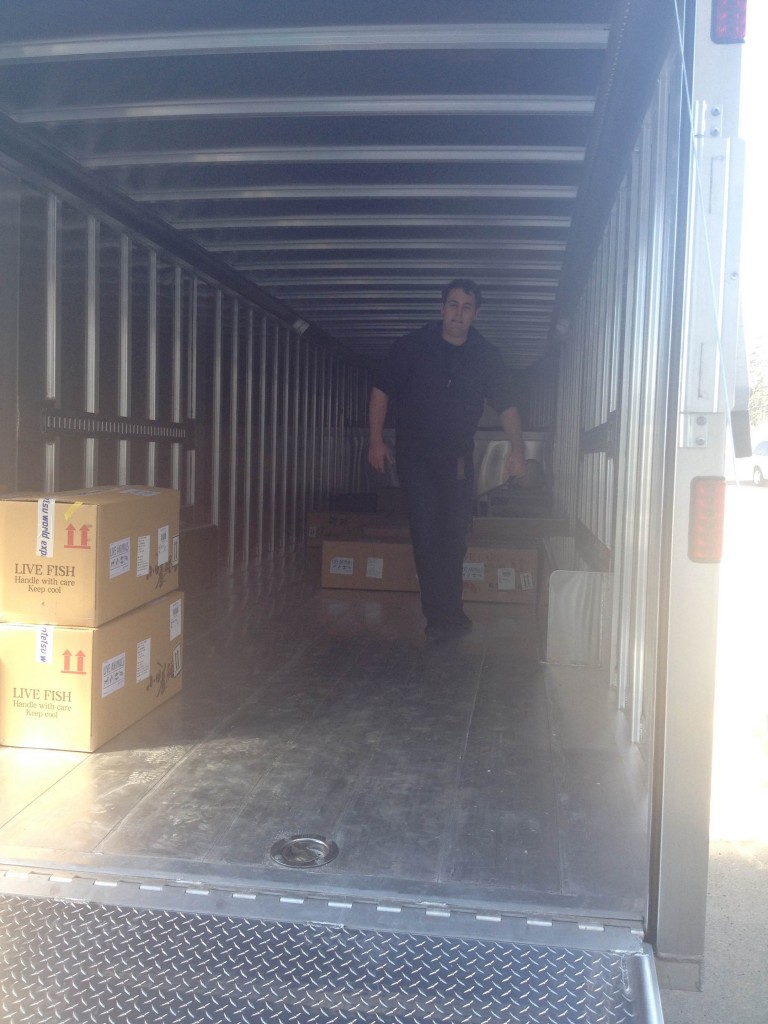 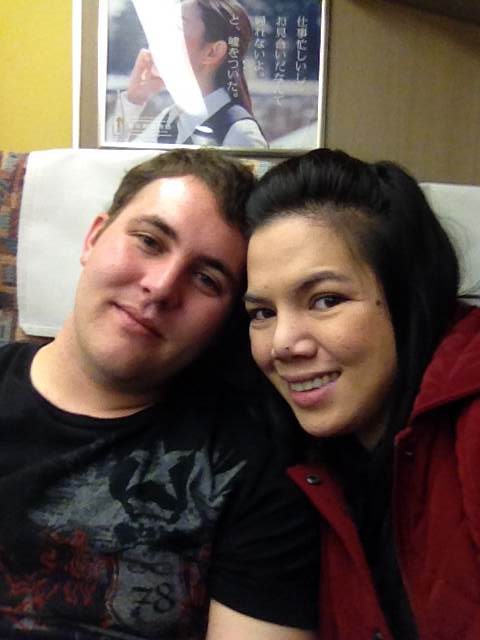 On the Shinkansen heading home!

When we arrived, the fish cleared everything like a breeze and when we got all the boxes loaded up on the 36-foot trailer that Koi Acres had recently purchased for their pond building division, we headed back to Scandia to unload all the Koi.

We were greeted at the farm by Bryan and Bay Bateman, Rick Jokerst and Sai Her who were so kind as to offer their help to us in unpacking all the Koi and setting them up for quarantine.  It was a good thing they came too, because while I did muster up some energy to help load the boxes up into the trailer, by the time we got to Koi Acres, they couldn’t even wake me up to get me out of the car!

The sandman and jet lag had finally caught up with me and I spent all day sleeping.  Devin was pretty much running purely on the adrenaline of taking care of his fish, but we are all so grateful to the Bateman’s, Sai and Rick for coming up and helping us.  They all had to drive out for so far to spend one day with us, and I spent the better part of that staring at the back of my eyelids! Gomen… 🙁

I’ve since caught up on sleep, evidenced by the fact that I can feel most of my limbs again.  But the sensation most dominant at the moment is the dull yet constant ache for Japan again.  I’ve got Japan hangover!

Before I left for Japan, I promised that I would share my entire trip on this blog, and I intend to make good on that promise.  I’ve learned, though, that the next time I go (probably in the fall for harvest season) I should make sure to get a mobile wifi device so that I can make sure to bring everyone along with me every step of the way as it happens.

So even if I’ve returned already, I will still be writing about it on my blog.  Over the course of the next few days for up to about twice a day, I’ll be updating with stories, photos and videos of my trip.  Some of the experiences you’ve already seen from my dad’s videos that he posted on the TOMiGAi Facebook or through Devin’s photo update on the Koi Acres Facebook page, but neither of them can be as long-winded with words as I can! I’m a girl and it’s built into my DNA to talk more than those two boys combined.. hehehe….

When Devin ships in fish from Japan, his usual port of entry is Los Angeles since Minnesota had yet to designate a port vet specifically for the importation of Koi to the state.  A few days before we were slated to head back to the United States, Devin gets a call from his dad.

“This isn’t 100 percent yet, but it looks like we will be able to start sending our fish directly to Minnesota now instead of having it route through LAX.”

Sweet! This not only reduces the travel stress on the fish, but also on Devin.  Devin is very much involved in the handling and packing of his fish since he makes sure he is in Niigata to consolidate and ship his fish before getting on the same flight as his Koi to the United States.  Because they are travelling such a great distance (Niigata – Narita – LAX – MSP), he has always made it a point to always be as close to his fish as possible.  So basically, if anything happens to his fish, it happens to him as well!

When the fish arrive at LAX, it’s pretty much a 24 hour ordeal for him since LAX is a notoriously busy port.  Getting the boxes to clear the proper government offices, then taking all the boxes and reoxygenating or even on some occassions changing out the bag completely then bringing them to the domestic cargo terminal to send the boxes off to wherever they need to go can be quite exhausting.  MSP (Minneapolis-Saint Paul) airport, in contrast, is a much quieter airport, which means quicker processing times, and since it is the final destination the travel time for the Koi is cut by about 12 hours, give or take.

Thankfully all the paperwork went through and for the first time in the history of Koi Acres, they were able to ship directly to Minneapolis! Yay!

We had to jump through a few hoops to make it happen, but Mike Sr. managed to change our flight itinerary from flying out on April 8th to LAX.  Instead we would be flying into MSP directly on April 9th along with the Koi.  It was amazing how everything was falling into place.