The other night after we went out to dinner with Mistunori Isa (Isa Koi Farm), Futoshi Mano (Dainichi Koi Farm), Hisato Nogami (Nogami Koi Farm), Taro Kataoka (Oya Koi Farm), Koizumi-san (dealer from Tokyo) and Uosui-san (dealer from Osaka).  It is truly amazing how long I’ve known some of these people as they have been friends with my father for nearly two decades now.  They have been part of my life since I was a child, and they have literally watched me grow up!  Taro san and Nogami san I’ve only really known for a few years (my father has known them for much longer as he would go to their farms to check out their stock).

As we counted the number of years I’ve known Mitsu-oniisan and Futoshi-oniisan (I usually call them “big brother” at social occasions), I came to realize that we have been friends for nearly half my life!  At least 12 years has gone by since I first met them when they first came to Manila, and I believe that might be a conservative estimate.  My father started his love affair with Koi when I was only five years old, and started our company two years later.  Nearly two decades later, I am so happy to have been able to build such a deep friendship with some of the most respected Koi Breeders in the world through the efforts of my dad. 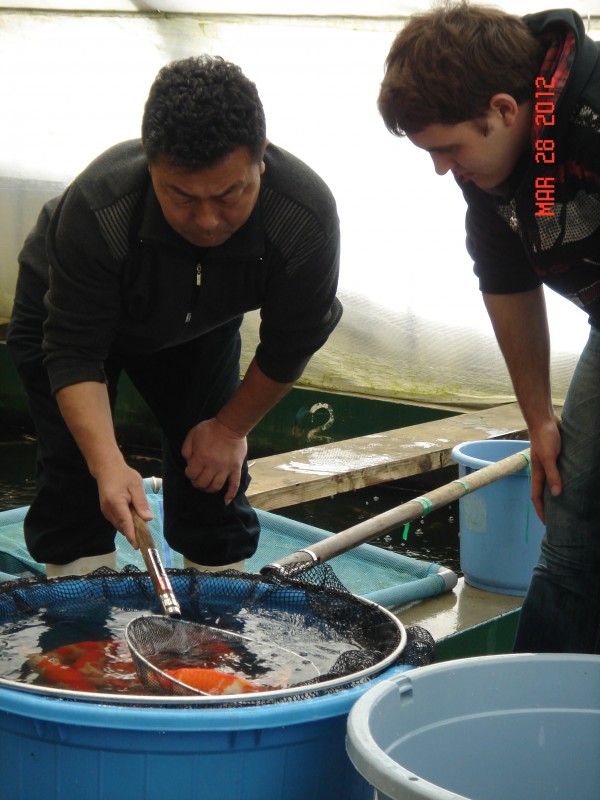 The next day, Devin and I were up bright and early to start picking our Koi from our most generous and kind host, Hisashi Hirasawa san from Marudo Koi Farm.  His collection of Jumbo tosai this year is extraordinary as there are not only a few beautiful koi, but many excellent tategoi.  The rule of thumb with Koi breeding is usually you have to breed a million Koi to get 20 good ones, but I think the trend is changing.  I had the opportunity to watch Sacho cull through his Koi, and I am most certain that at least 90% of the Koi that he went through got thrown into the Tategoi pond.

Devin picked out a few special Jumbo Tosai, and I found my favorite out of the bunch: 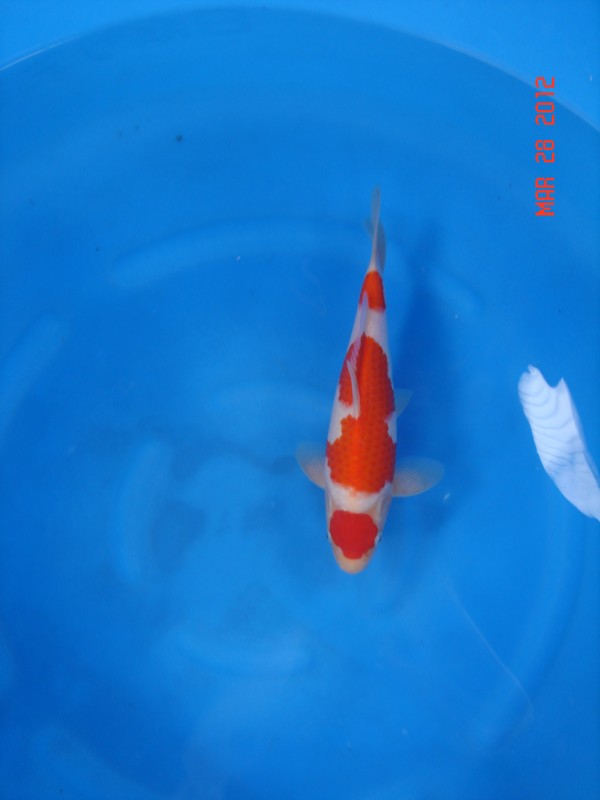 I almost hope it never gets sold so that I can be selfish and keep it for myself to watch it grow….but I don’t think Devin would like that very much… 😉

There are so many ponds to go through that this will not be the last post about Marudo Koi Farm.  While we were hanging out at the Marudo Koi House in Nigoro, Sacho turned our attention to a pond adjacent to the Jumbo Tosai gosanke.  He has recently begun breeding Shiro Utsuris, and it is definitely worth mentioning! While there is really only a few Koi (perhaps he was just seeing how it would turn out?), I feel it would be very interesting to watch how his Shiro Utsuris grow.

For lunch, Sacho and Okasan (mother in Japanese.  That is what we call Marudo’s wife, Yoshie-san) took Devin and I to soba. I can’t ever seem to get enough to eat! Japanese food is just so amazing, and even more so in Japan! Nihon ryouri daisuki! (I love Japanese Food!) 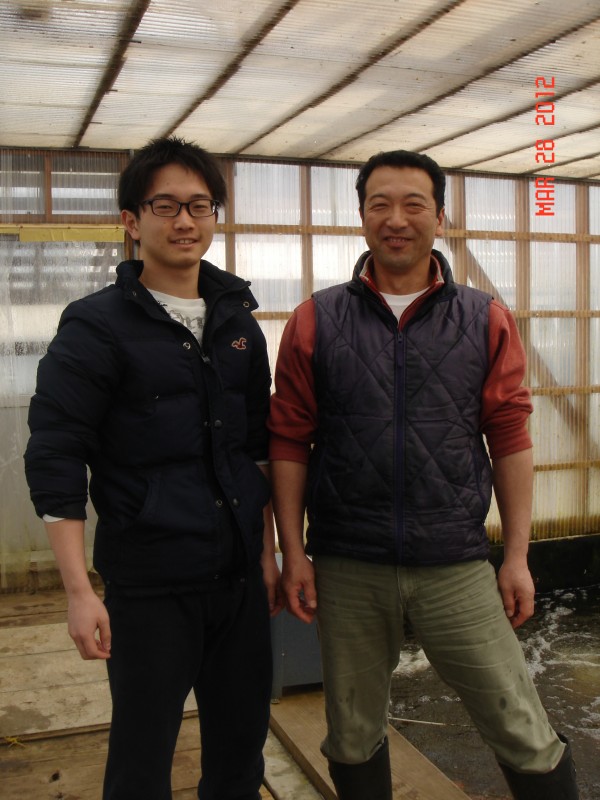 After lunch, we headed out to Nogami Koi Farm, and we were greeted by Hisato san and his son Chikara who was home for Spring Break from studying in America.  I must say, Chikara speaks excellent english.  More often than not, when I speak english to a Japanese native who learned how to speak English, I have to slow down quite a bit and speak with bad grammar.  Chikara needed none of those as I tried to see if he would understand me even if I spoke in my regular speed, strange mutt-like accent. Daijoubu! Chikara speaks and understand English so well, he almost forgot how to speak in Japanese as he tried to translate what we were saying to his father! 😉 Gambare, Chikara-kun!

What I love about visiting Nogami is that Sacho (Sacho means president or big boss) has such a kind heart and a warm, welcoming smile.  I had to ask Chikara if it was even possible for him to get mad as it seems he couldn’t even hurt a fly! He is so much fun to be with and is always in bright spirits that it is always a treat to spend some time with him.  Doesn’t hurt that he breeds such fantastic Koi, and that his fish are no strangers to the major trophies given at Shows not only in Japan but also all over the world. 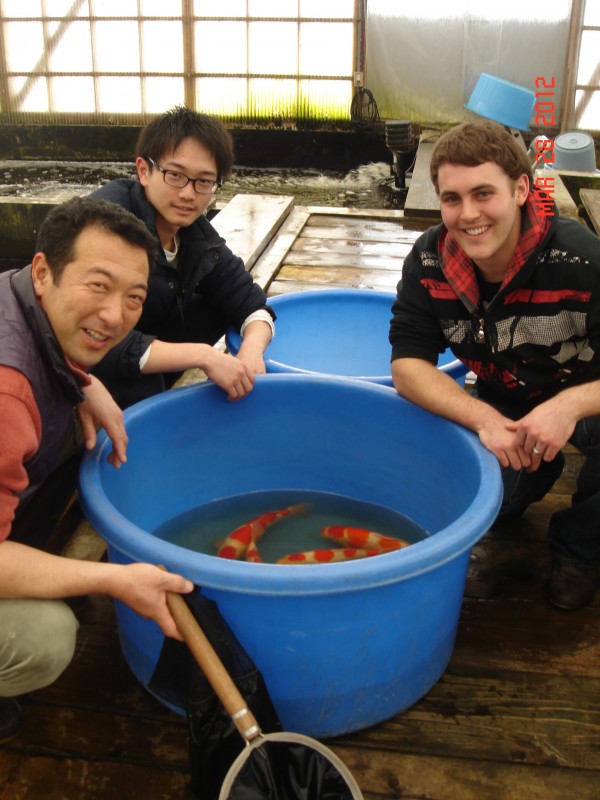 I promise this was totally candid.

Nogami Koi has become quite famous over the past few years, and last year he won Reserve Grand Champion at the All-Japan Show with his splendid yon-dan Kohaku and of course how can we forget how he won Grand Champion at the Nogyosai Koi Show twice?  Despite the numerous awards he has already garnered, Nogami is strangely still a relatively small breeder and is pretty much running a one-man show.  Regardless, his Koi is definitely not a reflection of the size of his operation as he proves to be producing some of the highest quality Koi money can buy. 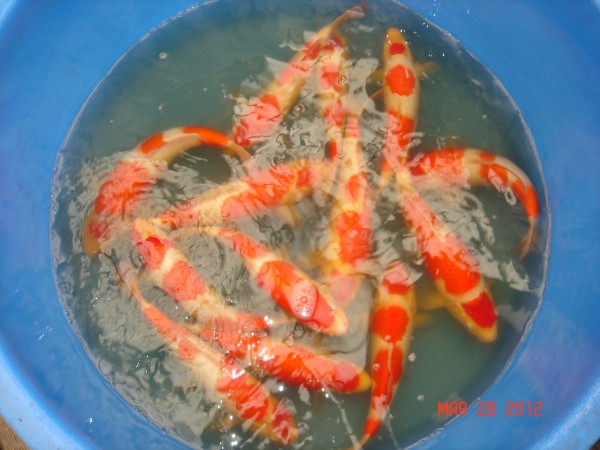 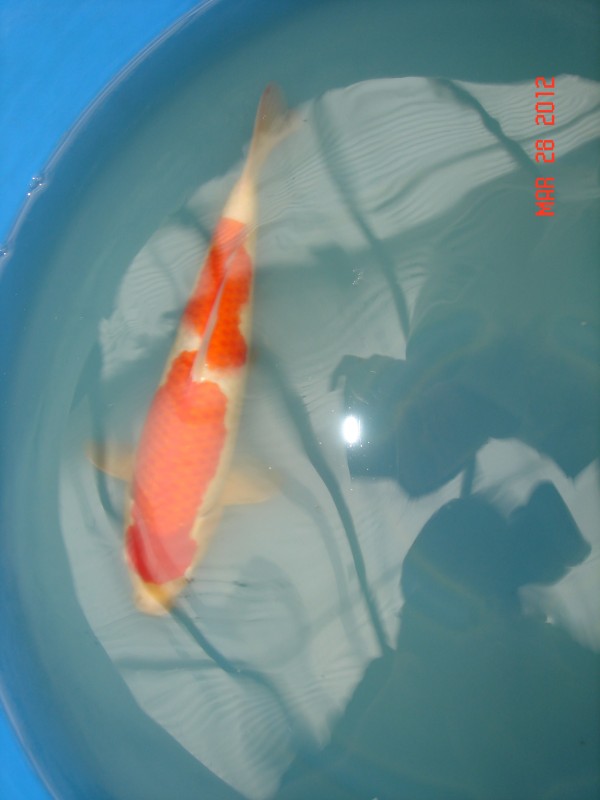 Can you see Devin and My reflection?

Forgive the poor photo quality as there was too much glare that my little point and shoot camera wasn’t able to filter much of it.  We should be able to get better photos of the Koi we purchased when we return stateside.

That afternoon, we phoned Sir Mark Gardner to see if he could fit us into his very busy schedule.  He was slated to depart for Manila in a few hours, but he very graciously took a couple of hours off to have a drink with us. We met up in Ojiya and talked a little about our favorite subject: Koi.  Kois & Ponds is very grateful to all the support that Mark has shown us as he will be giving a talk in Quezon City about his experiences living in Japan, Koi Breeding and just basically sharing with everyone what he has learned about the Koi hobby.

Please do come join us at Kois & Ponds in Quezon City on March 31st of this year to share Koi thoughts with Mr. Mark Gardner.  We hope to see everyone there! 🙂

I am very grateful to have the opportunity to be here in Japan for this trip and have the awesome job of seeing all the special Jumbo Tosai that are being offered up for sale by some of the finest breeders in the world.  I have it on good authority that some of the Koi that I have been eyeing this trip will be seeing Manila weather in the summer.  I hope everyone will once again join me in Manila in June to view our very special collection of Jumbo Tosai to be shipped soon!  I’ll be sure to keep everyone posted on this as plans develop.

For now it’s time to visit more farms and treat myself to more Koi viewing!