I was speaking to my dad yesterday and we were reminiscing the time that Devin was still working in Japan while i was living in America.  Devin made quite an impression on everyone (myself, my father and my Uncle Kenji) in 2010 after the All Japan Koi Show that was held in Niigata, about four months after we had met. We left Niigata early so that we wouldn’t be rushing to catch our plane out of Japan the next day.  Suddenly, Devin gave Tani-san a call and said that he was on a train towards Narita at the moment.  He wanted to have dinner and drinks with us and see me off the next day at the airport.  My Father and Kenji looked at each other in disbelief and amusement and welcomed him to join us.

As I wake up everyday to the view of the beautiful mountains and the peaceful tranquility of countryside Japan living, I find myself growing more and more envious of the time Devin spent here just enjoying everything on a daily basis for three years.  I’ve already mentioned how wonderful the food is, but apart from that, Niigata is just absolutely beautiful and the people couldn’t be any nicer.

The other day, Devin and I went driving around for about two hours delivering packing slips to the different farms that the fax didn’t go through to.  We had to go through the mountains and decided to take the long way home.  I was completely stunned by how beautiful the view was.  Unfortunately, it took my breath away so much that I forgot to take out my camera to share it with everyone.  I suppose that just means you all have to make the trip out to Japan to enjoy the view live! In any case, I don’t think any photo would be able to capture it’s true beauty.

Buying Koi doesn’t usually take fifteen days to finish, but Devin acts as his own agent and takes care of putting together all his shipments.  My company has always had the luxury of having our own agent in Japan take care of it for us, so we were never bothered with the intricacies of logistics.  I have to say I have come to appreciate the work that Mr. Kenji Tani has done for us over the past two decades. Because he does such fine work taking us around, arranging all the shipments and consolidating all our purchases, our only concern was enjoying Koi and learning more about them.  I never realized how intricate the process is in reality.  So much has to be dealt with and so much information has to be passed on to so many different people that it is much more stressful than I anticipated.

At the moment, I am staying with Devin’s Japanese family here at Marudo Koi Farm, and everyone has been absolutely wonderful.  Yesterday and Today is pretty much a paperwork day for Devin, so I had the chance to spend a good amount of time with the people here at the farm.  It is so obvious how much love and care they give Devin (and by extension, me) that it is truly heart-warming.

The Hirasawa family seems to truly enjoy how much I love Japanese food and last night they took me out for sushi.  Because I had never tried conveyor sushi in Japan before, that’s where we decided to go.  It was soooo incredibly good! I had never seen sushi with melted cheese on top and I must say whoever came up with it is an absolute genius. We all had a good time and I have a photo to prove it: 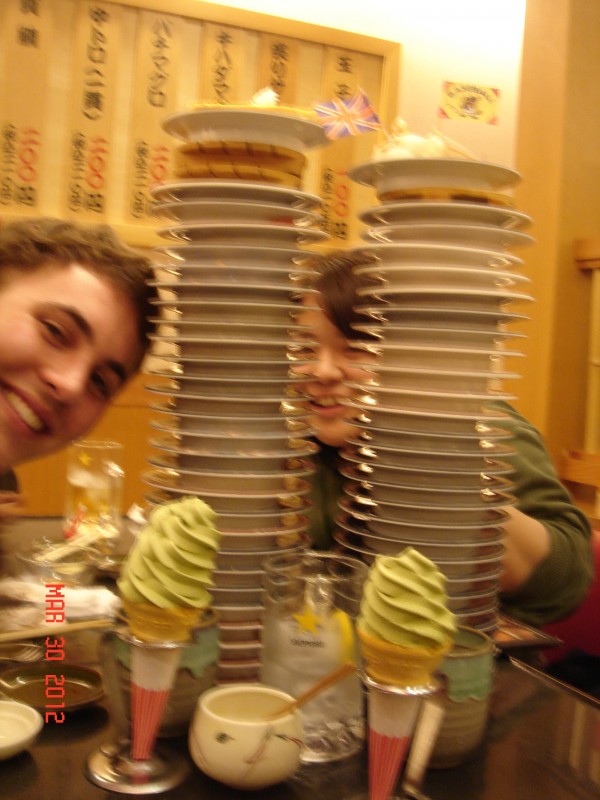 We thought we were done eating.... 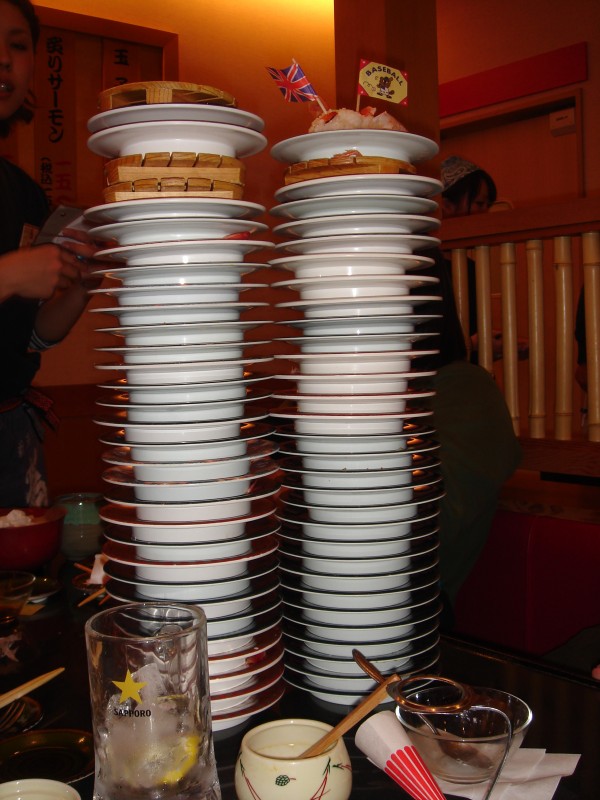 Apparently, we needed a few more plates. I think the total came up to about 60 plates.....

The amazing part is that those plates were only for 5 people, which wasn’t the total number of people in our party.  Toshi-san (Sacho’s second child) and his wife Kasumi-san along with their three children sat in the table opposite of us, and I believe that they came a close second to the number of plates we accumulated.  Hontou ni Oishiikatta!

After dinner, Keiko took their cousin (she is here in Niigata from Chiba for Spring Break) along with Devin and I to Karaoke and some rounds of darts.  I had no idea Keiko was so good at singing! And she plays a mean game of darts.

We called it a night at midnight, as there was still work to be done at the farm in the morning.  I am so grateful to the Hirasawa family for their wonderful hospitality and I couldn’t be having a better time with them.  Everyone  wanted to come to Las Vegas last June to see Devin get hitched, but of course the farm couldn’t be left untended, so Sacho came on his own.  Tonight, though, they are throwing us a wedding party and we are all going out together: both the family and the staff.  I’m super excited as they are all so much fun to be with! 🙂