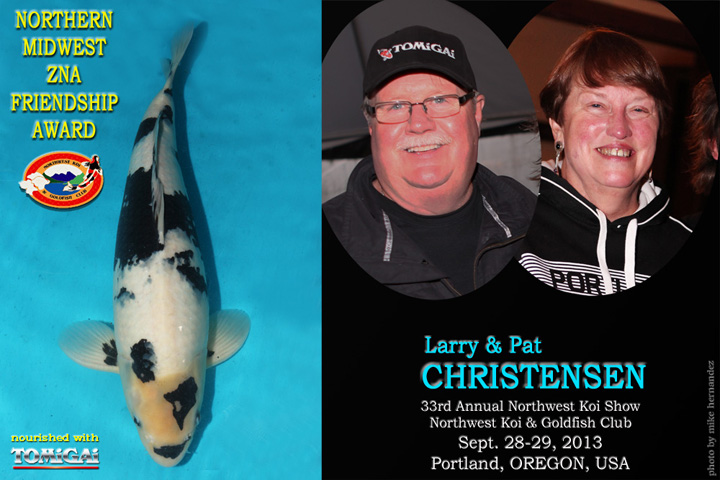 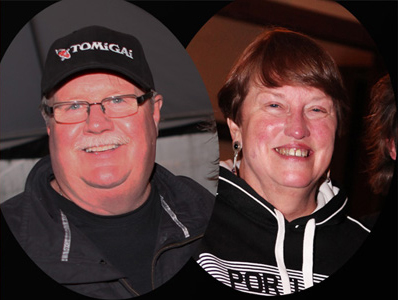 Hi, My name is Larry Christensen. I’m one of the original members of the Northwest Koi and Goldfish Club. My wife and I were very fortunate this year to win Grand Champion B in this show.  We won it with a Gin Rin Mastukawa Bake.  Mikki twisted my arm here last year and said that one of the things about Matsukawa Bake is the purity of the White skin, which we knew already.  Ours was…in her phase of transitional change on it.  The white wasn’t quite as bright a white as we wanted to have, so she introduced us to the TOMiGAi Tategoi Food.

I’ve been so pleased since we were introduced to this food because the white change on our fish has been incredible.  I mean, not just minor changes, we’re talking MAJOR changes.  They’ve gotten a lot brighter, they’ve gotten a lot crisper and it really has a tendency of showing of the beauty of the beni and the beauty of the sumi on the rest of the fish that we’re using it on now too.  So we’re extremely pleased that Mikki introduced us to this and got us to change from the other food that we were using over to [TOMiGAi].  The proof is in the pudding, the fish won Grand Champion B this weekend, so it’s definitely been a big change.

One of the things with the TOMiGAi Tategoi Food is that we’ve also seen a lot more development in the girth of the fish.   The muscle structure of the fish has been extremely, extremely powerful.  One thing that we’re seeing too is that on the females, they aren’t getting the [really] heavy bellies on them….they’re able to digest it.  Another thing that we see that’s very good with this food is that we don’t have as much waste with the food.  So that’s made a big difference in the fish.  They have a tendency of utilizing it in their belly a lot faster and moving it out [and] passing it, but the waste on it is not as great as some of the other foods that we’ve tried in the past. So, we’ve been extremely pleased with what we’ve seen using this food over the last twelve months.

The fish have really showed themselves, not only with the Matsukawa Bake, but we also have a Kumonryu and the whites really brightened up on that fish and the blacks have really gotten a lot deeper on it.  And again, the body structure has filled in better and I think the whole conformation on the fish has changed for the better from what we’ve been seeing in the past from some of the other foods that we’ve tried using on it.