Before I go to the highlight of the post, I simply must add something:

(Photos may be viewed here.)

As many of you have already heard, Koi Acres hosted their maiden voyage onto the beautiful world of hosting their own Ikeage, and what a wonderful event it turned out to be.  The weather was absolutely and unseasonable perfect.  We couldn’t have asked for a better setting.  Many friends of Koi Acres and TOMiGAi Koi Food joined in on the festivities, including Bryan and Bay Bateman, the Korfs (Paul, Shawna and Kaitlin plus 1), Mike and Ron Weynschenk of Southwest Koi and Goldfish, Tony Geraldi, Cal Kostelyk, Shirley and Bruce from Green Bay, WI (I asked Devin what their last name was, and he did say it, but he also said, “don’t ask me to spell it”.  Like he is really a reliable source for spelling anything….just saying….), Nancy Goss (shoutout to Shirley and Nancy: I’m a little disappointed that you weren’t wearing heels for the “Debutante Ball”), Teddy Bair, Harvey Filister, Bill and Jan Doyle and Bob together with his wife and son from Chicago.  And what would a Koi Acres event be without an overflow of food? Thank you Big Ernie and Little Ernie for an amazing smogasboard of incredible grub!

a little flashback: Back in June when Koi Acres began putting in the fishes in the mudpond, Devin was aware that they would have a much shorter growing season than he would have wanted.  Unfortunately, circumstances didn’t allow for them to begin construction any sooner, so he decided to make do with what he got.  That being said, while he was confident that the Koi growth would turn out quite well, he wasn’t expecting to be stupefied with the results either.  [I speak on Devin’s behalf because I am the better half! ;-P]  Regardless, he pressed on forward and did the best that he could in feeding (Shameless and certified Truthful Plug: Devin did feed exclusively and 100% TOMiGAi Koi Food to all the Mud Ponds) and monitoring the fishes on a regular basis.  While there have been tragedies and setbacks here and there, it most certainly was a setup for a greater comeback.

So the morning of Saturday arrived and we prepared to harvest pond 3, which was the pond that hosted the grow-out jumbo tosai that was purchased in the spring for growing out.  Everyone came out bright and early in eager anticipation of what was to take place.  At around 10 am, Devin began the ceremonies with the traditional blessing of the pond with sake and a toast to a fruitful harvest. Stylish styrofoam cups was passed around and sake was consequently poured in. “ii koi agarimashou!” was the battle cry as everyone raised their cups and took a shot.  (Devin was waaaayyyy too used to this as he noticeably gulped his down markedly faster than the rest of the group…fighting knots in his stomach, perhaps?) And the pull began.

I don’t know how everyone felt, but the suspense was absolutely KILLING me! I suppose I wasn’t alone as most people were entertaining themselves with the occasional banter towards Devin, Tony, Tayler (on the second day, Paul Korf joined in on the mud pond fun) and Mike who were in the pond pulling, and side comments about the resident frogs getting in the way.  Frog legs for dinner, anyone?

Finally the Koi were pulled to one side and the raising up of the fishes began.  Oh boy did it begin.  One after another, incredible fish after incredible fish, each other larger and more lusterous (is that a word? Spell check said it isn’t. Oh well, it is now!) than the last.  It was a harvest that would rival Japan.  Spectators could barely say more than, “ooooo” and “aaahhhh”, and quite frankly, I felt the same way.  Despite having barely four months to grow out, the Koi certainly didn’t show it. To top it all off, there was really no obvious sign of problems with the fish: no clamping of the fins, no skin problems, nothing.  They couldn’t be any healthier coming out of the mud than if they had stayed in the same concrete tank the entire time.

I tried getting comments and reactions from those present, but there was little that they could say that would rival the expression on their faces.  To be quite honest, I don’t think that even Devin himself expected the results that he got!  On that day, Bryan and Bay decided that their absolutely gorgeous Sanke, which was one of the largest of the Koi harvested, was to be named “Ms. Hernandez”.  They had wanted to name it Mike since it was my dad who had helped them decide to purchase her, but because she was such a beautiful lady, it would be unjust to name her a man’s name. 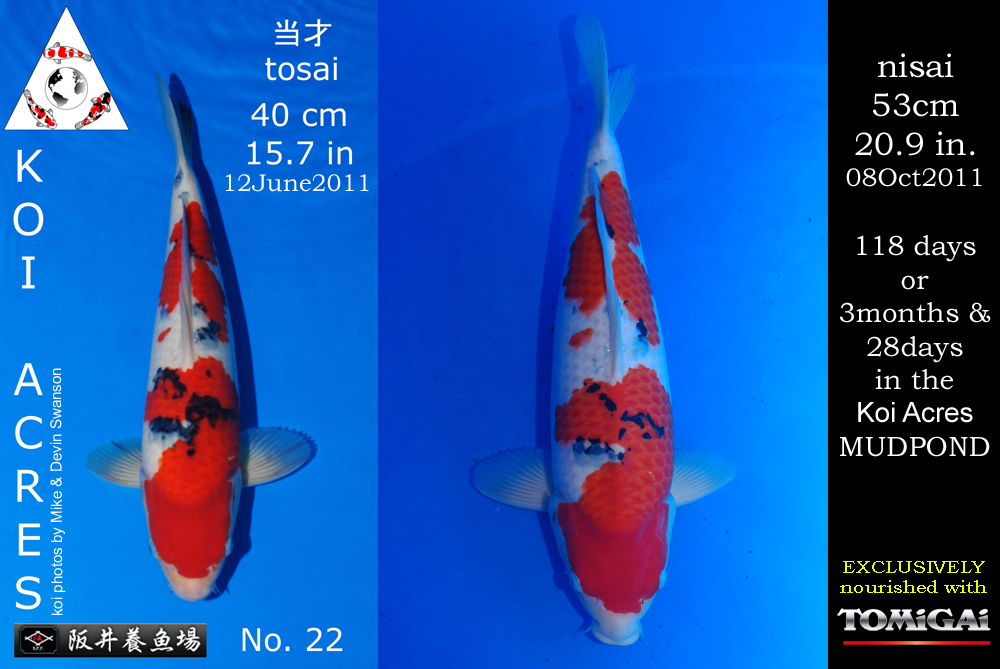 The rest of the first day was spend sizing and photographing fishes, with the largest growth coming in at 20 cm and the smallest growth at about 11 cm.  We all were beside ourselves with how successful the first day went.

But the Great Ikeage was only halfway done.  As the second day arrived, Devin was once again up at 5 am checking and making sure that everything was going to go smoothly.  We were to harvest the pond that played host to the Koi that Devin had bred in Japan while he was apprenticing at Marudo Koi Farm and some Omosako Shiro Utsuri that he had put along with a lone Marudo Kohaku in Pond 2.

Before we continue on to narrate the events of Day 2, I must deter for a quick second and send another round of…

Congratulations to Bryan and Bay Bateman for winning Mature Champion at the Ikona Show with Devin’s bred Showa! 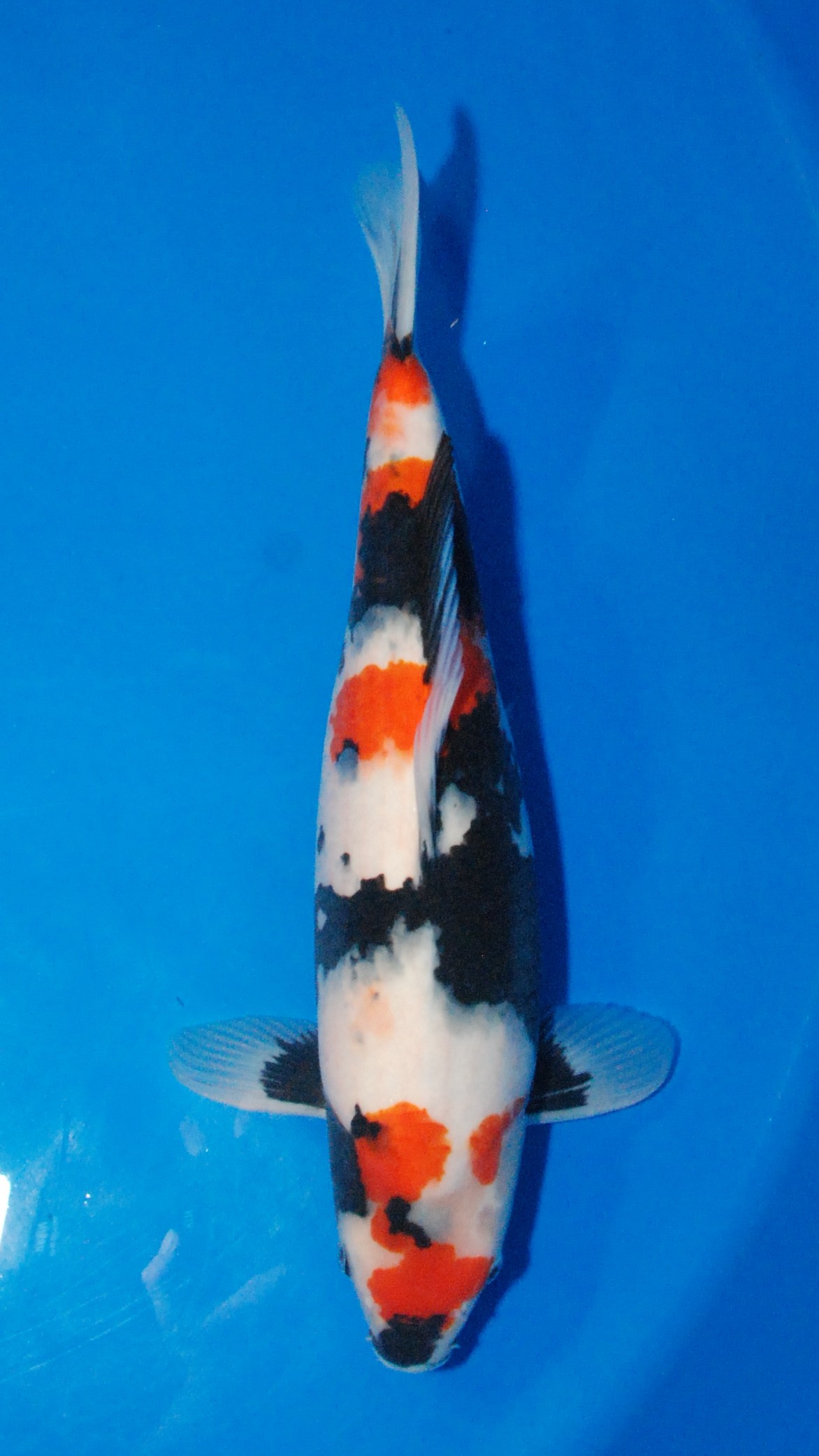 They had purchased this Koi from him in the Spring and had aptly named it “Mikki” because (warning: cheeziness alert….and I love it!) it was “Devin’s”….Aw……I really love you guys! 🙂

This pond was certainly one that Devin had low expectations for.  Before putting his fishes in there, they were showing little promise of becoming any better and I myself didn’t expect much more from them either.  We were both happily mistaken.  The results were once again beyond words.  While we could not expect every single fish to turn out, the ratio fishes that became more beautiful against the ones that lost color was staggering: 12 to 4. The bodies and growth on all the fishes, as well as the luster on their skin was incredible.  There was a particular Shiro Utsuri there that Devin could not take his eyes off: it had grown massive.

Another Showa that he thought was already losing its beni had become an exquisite Inazuma Showa that warranted him to exclaim explicits to the camera that I have every intention of using as blackmail! 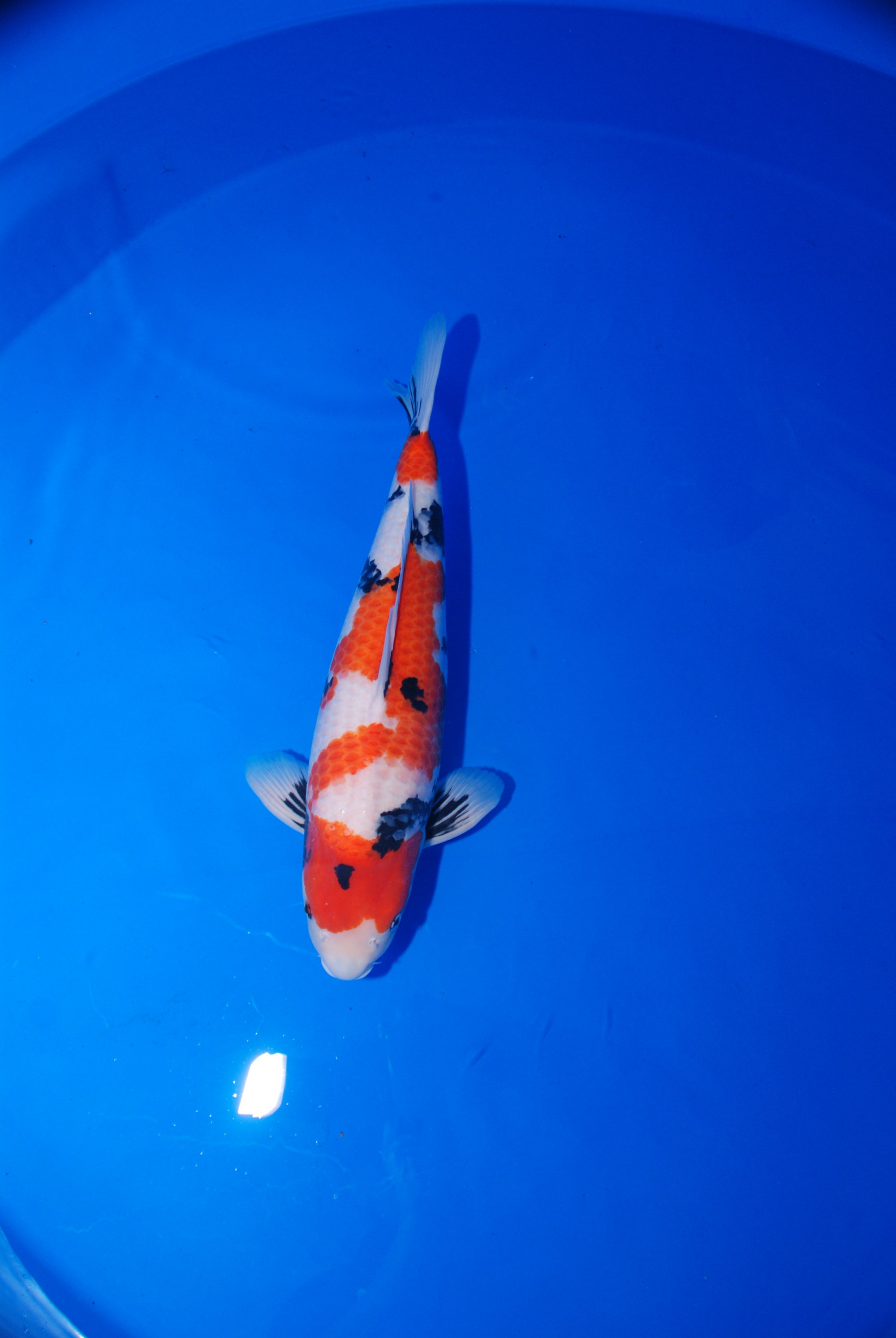 [Note: This is a raw photo of the Showa.  Cropping and documentation of Koi Information has yet to be added.]

As the day drew to a close and hobbyists and friends alike began to pack up to return home, the workday was far from over for us as we began documenting and sorting out the fishes to different tanks as they would each be getting different diets.  Devin even got a rare video footage of me lifting fishes while he netted them and transferring them to the neighboring tank! (That will never see the light of the Internet!)

After everything was packed away and the tasks needed to be done dwindled to zero, Devin and I sat by the tanks with a couple of beers staring at the newly harvested fishes.  They couldn’t have looked happier and more beautiful than they were.  “Your dad is a genius at making Koi Food.” was Devin’s remark to me.  “You really think that this has a lot to do with the food? You aren’t just saying that because you’re married to me, are you?” was my curious response.  “No.  Look at the fish. Just look at it.  I only got less than four months of growth on them and I even fed all the shiros with Spirulina! Look how beautiful they all are! TOMiGAi definitely had a lot to do with how beautiful the fishes turned out. I am so happy with how everything went.”  Kampai.

It was a weekend to remember, not only because it was the first annual Ikeage for Koi Acres, but also because of the great success of both Koi Acres and TOMiGAi Koi Food.  To Devin: Thank you so much for believing in TOMiGAi, and for all the hard work and love that you have for Koi. I am so lucky to be called your wife. To all the hobbyists and friends who came out for the event: Thank you for your faith, support, friendship and love to both our companies. To the Swansons: Thank you for always pushing and pursuing to achieve greater things in the Koi hobby. To my Papa, Mama and Kuya Tom: Thank you so much for all the hard work you put in this industry and to TOMiGAi.  I would never have discovered the love of Nishikigoi if not for your unwavering faith, passion and dedication. I feel so blessed to have you as family.

We have yet to complete all the photos and videos from the weekend’s event.  It has taken us some time to recover from such a great success!  For now, there are a few before and after photos posted already (click here to be redirected to Koi Acres Ikeage Gallery Page) Please check back periodically as we are working around the clock to complete the photo compilation courtesy of Michael Hernandez. Photos were taken by myself and Koi Photos were taken by Devin Swanson.