Welcome to the new TOMiGAi Website! It’s still under construction, so please bear with me for the next few days.  I’m slowly getting all the pages updated, and I expect to have all the links fixed by next week.  Thanks so much for your patience!

It took me a while to process all the media from the harvest this time around.  Apart from being filled with so much excitement about the successful weekend, there seemed to be a bug going around and I was mostly unable to concentrate on much work before my head cold got the better of me. Change of weather perhaps?

In any case, I got around to editing the video from the harvest today, and I have to say I think I’m getting the hang of video editing! It only took me around three hours from start to finish then another hour to upload the video online, so I thought I would have this post up before dinner time.  Not so.

The challenges about being a videographer (especially when you’re not really a professional one!) is that oftentimes there may be some occasions where vital footage is missed.  I have to confess that more often than not I was too busy looking at the fish that I forgot to actually capture footage of them!  Thankfully we had not one but two glamour photographers (my dad and Devin) to take really good photos of the Koi as well as several hobbyists who took their own photos of the fish.  Because I missed so much footage of Koi, I decided to take it upon myself to edit some Koi photos to share with everyone on the blog.  Then I though, maybe I should turn it into a fun little activity for all my readers who have been so patient with me whenever I blog a day (or maybe two, or three.. but who’s counting?) later than I said I would.  So I spent the better part of the night editing photos for the first time ever.  Now I know how my dad feels when he works into the wee hours of the morning putting together his photo collages.  I didn’t really do much to the photos: just cropped and put the information on there. But man, it definitely takes so much more time than you would think!

This year Koi Acres gave me free reign (after approval, that is!) to create some mini-events to keep everyone entertained.  Something that we had been talking about for some time was creating a product that was specifically designed for the hobbyists who enjoying showing and how we could make it more convenient for them to transport their Koi safely.  Thus came the birth of the “Koi Show Kit” complete with all the necessary things that one might need to bring to show.  There are different kinds of kits in the works; for example, a “premium kit” would include show bowls and an alcohol spray bottle (alcohol not included) and other things that needs to be purchased only once.  This weekend was the beta launch of the standard kit, which includes:  5 pre-double bagged Koi Acres brand of Koi Transport Bags, 12 rubber bands (we followed to principle of the  hot dogs and hot dog buns), Ebalgin, salt and ammonia binder.  To facilitate the launch we bundled it up with another special mini-event.

At any given Koi event where a group of Koi are presented all at the same time, it is part of human nature to create competitions between themselves as to which one is the better Koi.  To make it more fun for everyone, we decided to rank the customer’s Koi from each pond from First place up to third place.  The first place winner from the pond will be deemed the Champion and his or her “trophy” was a Koi Acres gift of the Standard Koi Show Kit.  At the end of the three days of the harvest, the judges would then look at all the Champions and determine who would be the Grand Champion among all the champions.  Before harvesting began, we asked the following people to judge the Koi:  Michael Hernandez, Bill and Maureen McGurk, Shawn McHenry and Shohei Takatsu.  Of course, Devin couldn’t resist judging his own Koi so when there was a tie, I ended up having to break it.  Yeah, I totally loved having that power! lol.

Since all the judges were in some way, shape or form is part of or affiliated with the Shinkokai, we decided that we would judge it how they would in Japan: with a show of hands.  First the nominees for each place was selected, then I would point the each Koi and count the number of votes that it got.  The Koi with the most hands raised won.

Here are the nominees for Pond 1: 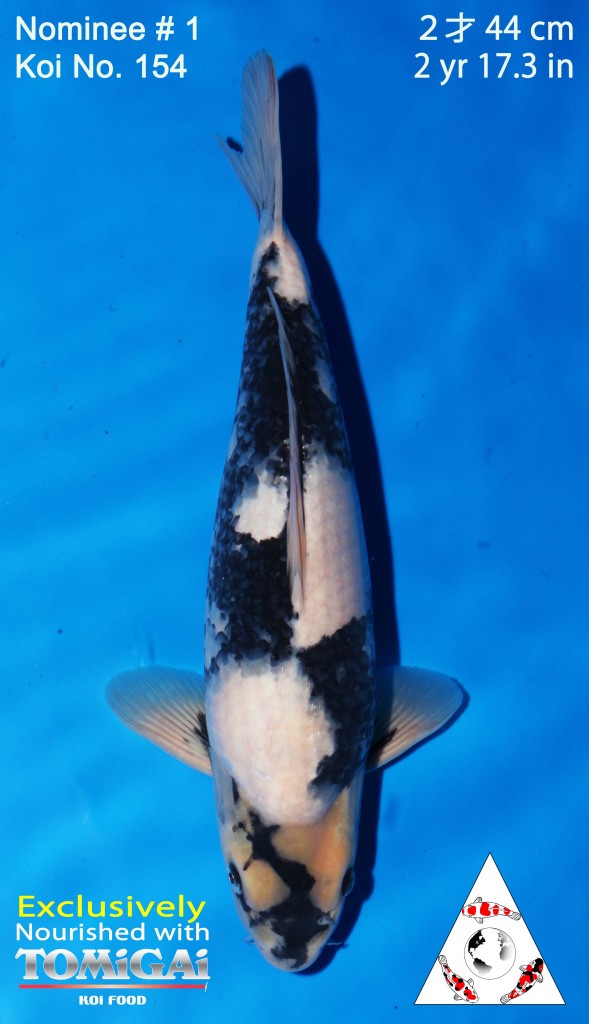 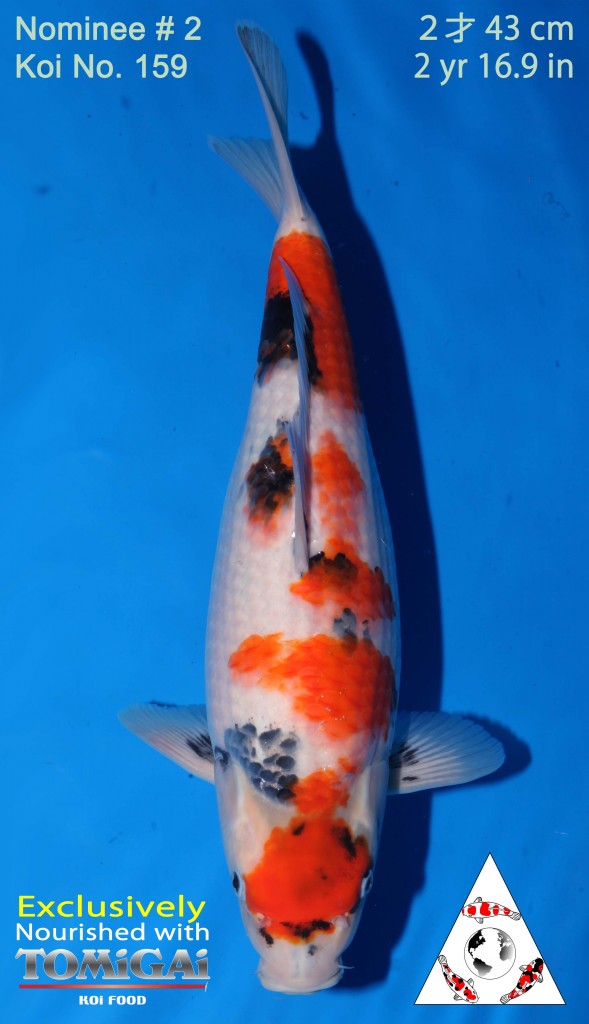 For Pond 1, there were only a few customer-owned Koi and more Koi that was unsold, so in addition to judging the purchased Koi we decided to rank the Koi that was unpurchased as well.  We separated them into two tanks and judged the best of the tanks separately.

Here are the nominees for the unsold nisai Koi still available at Koi Acres. 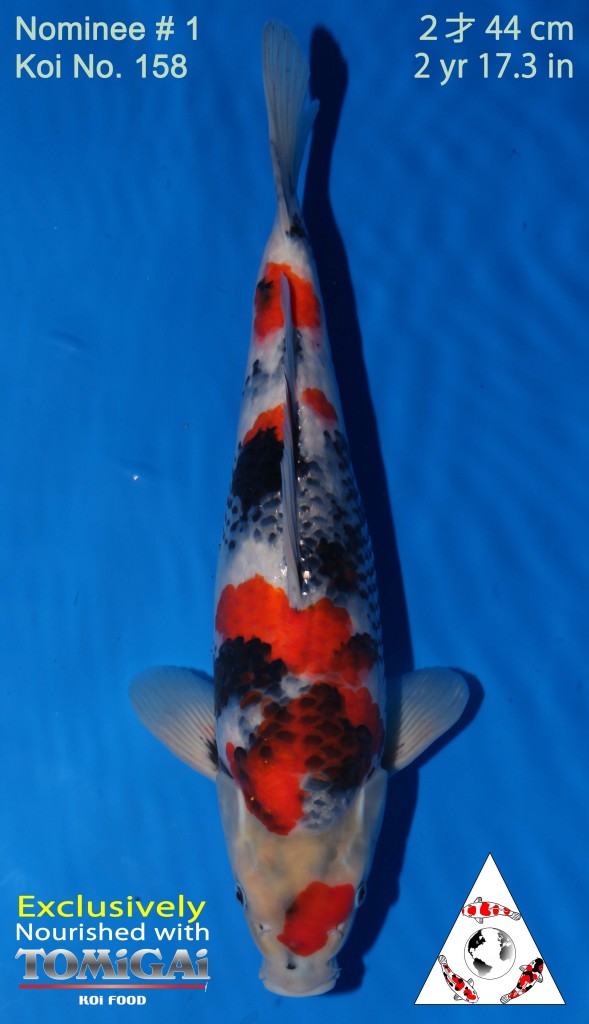 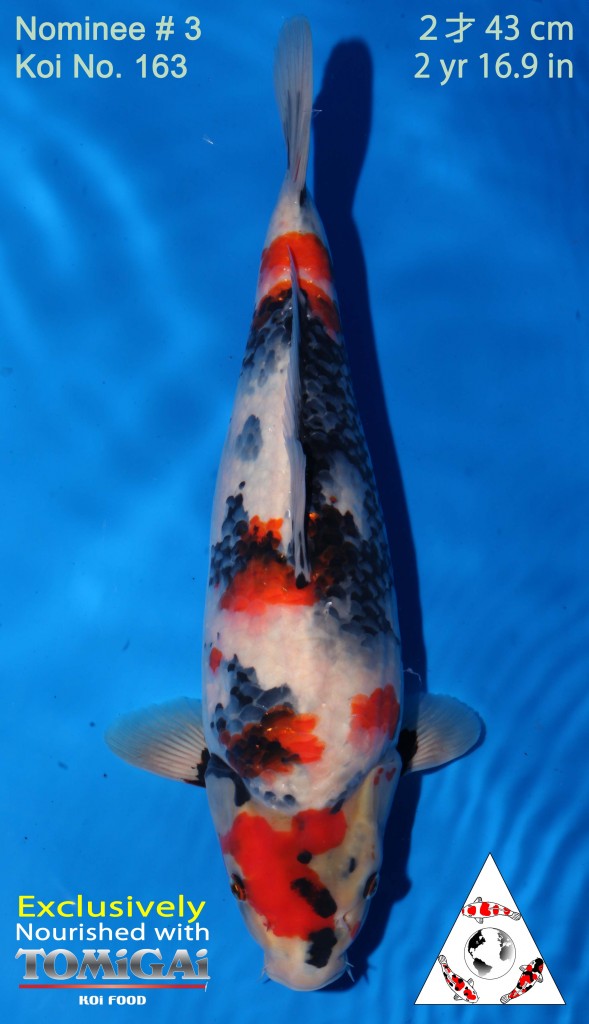 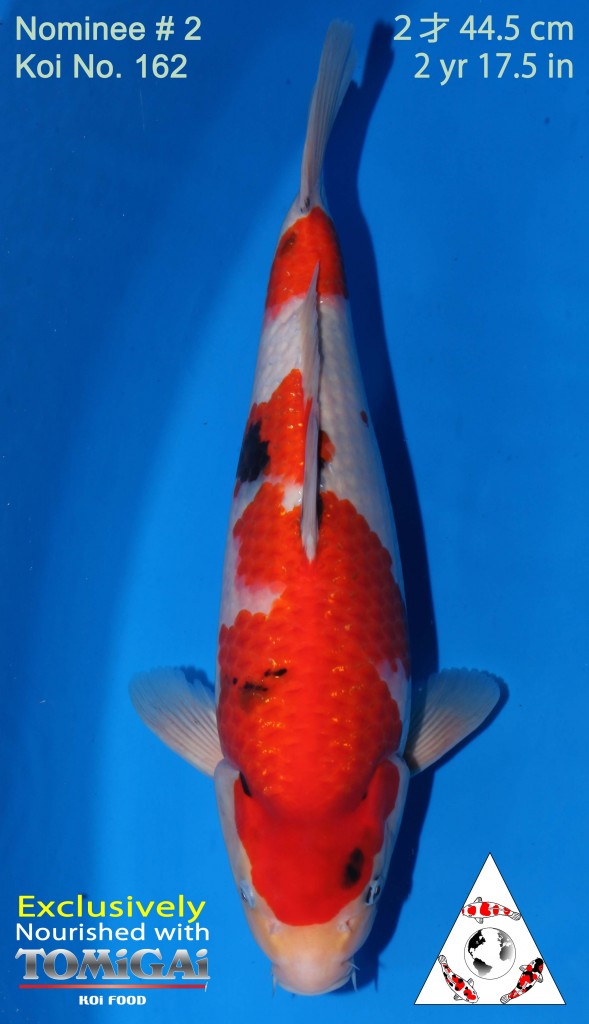 Here are the nominees from Pond 2: 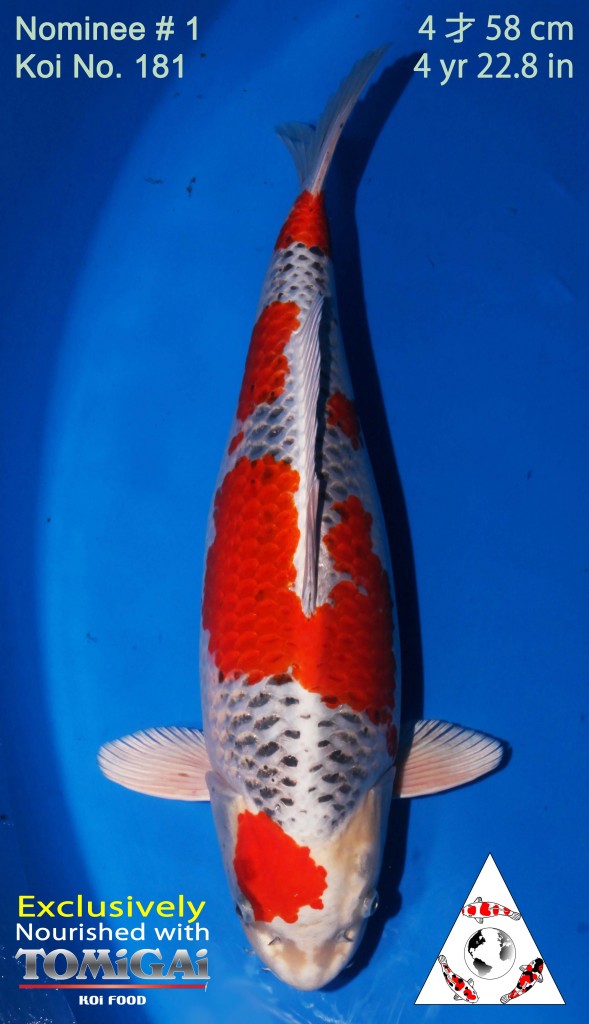 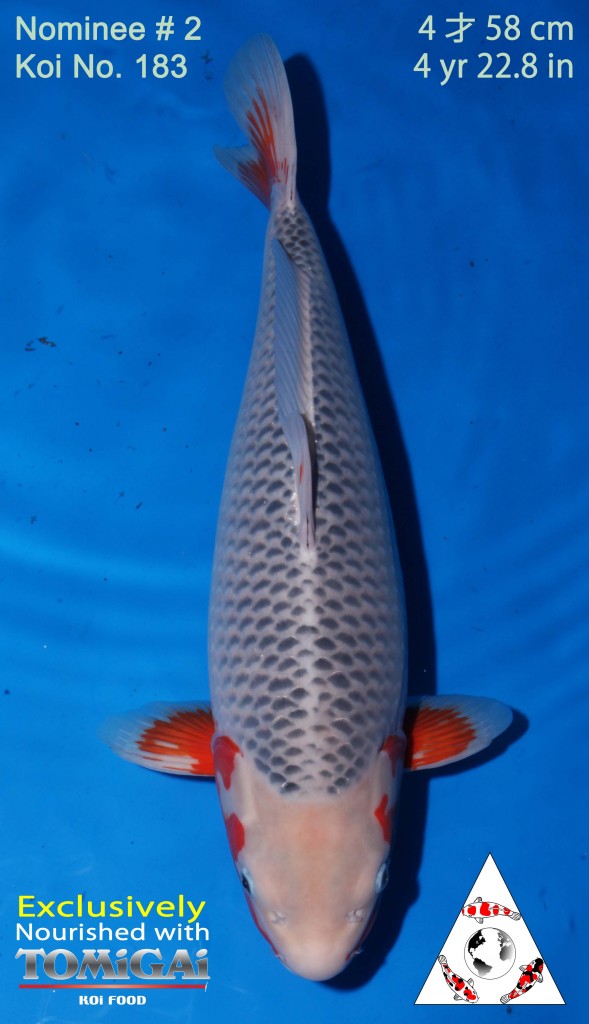 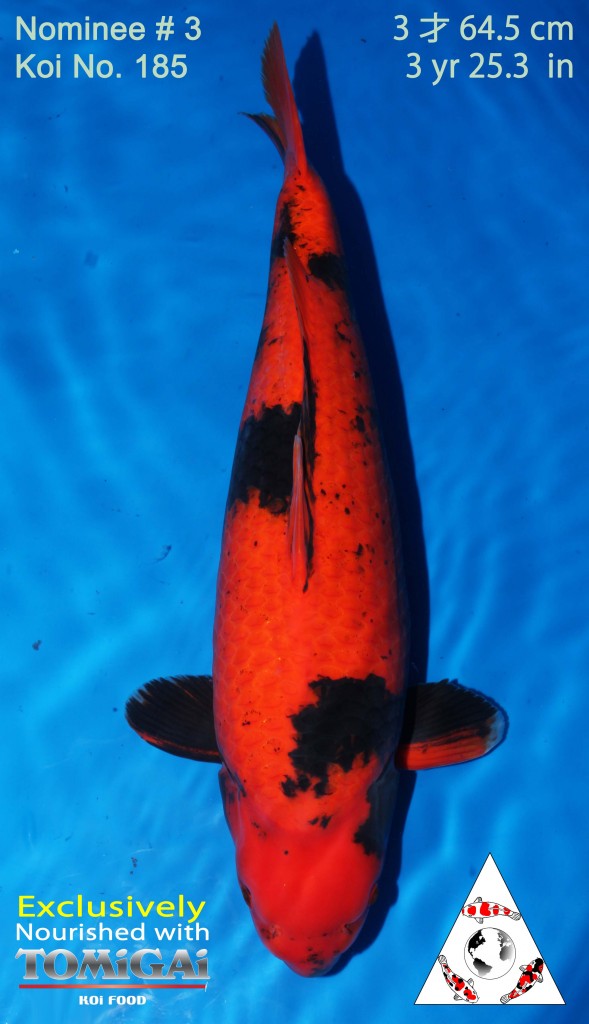 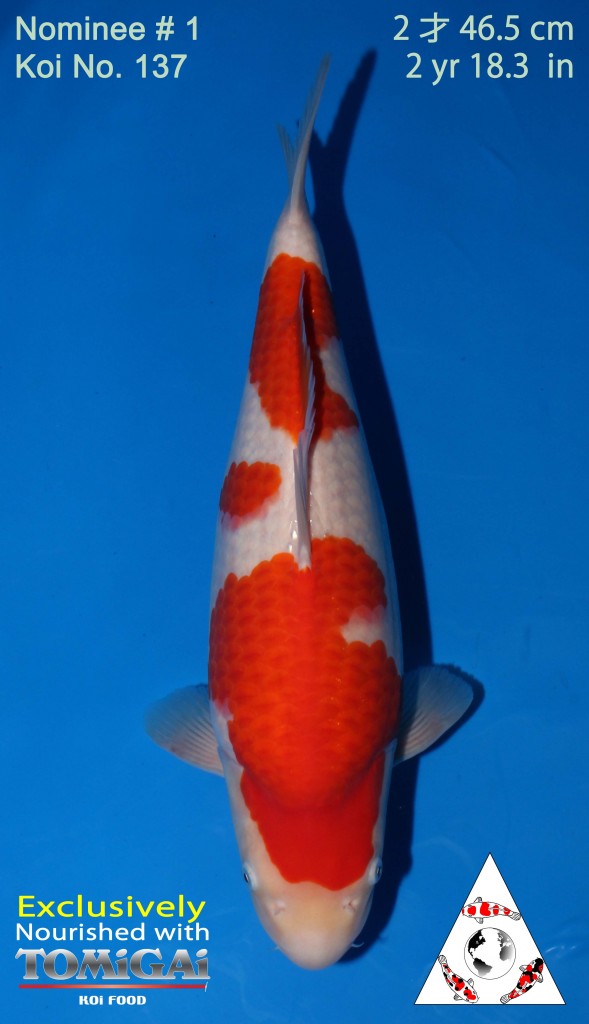 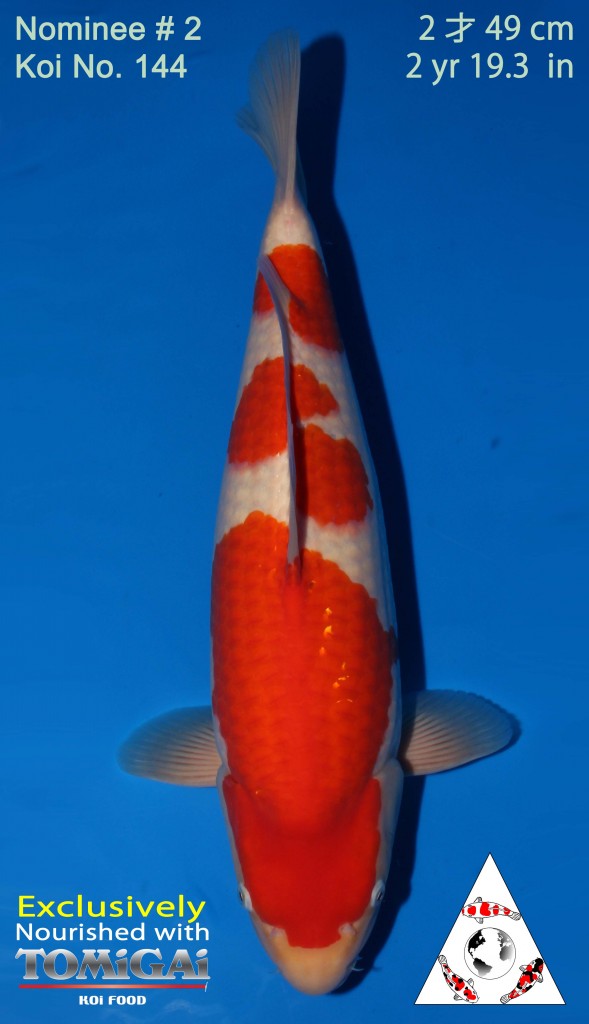 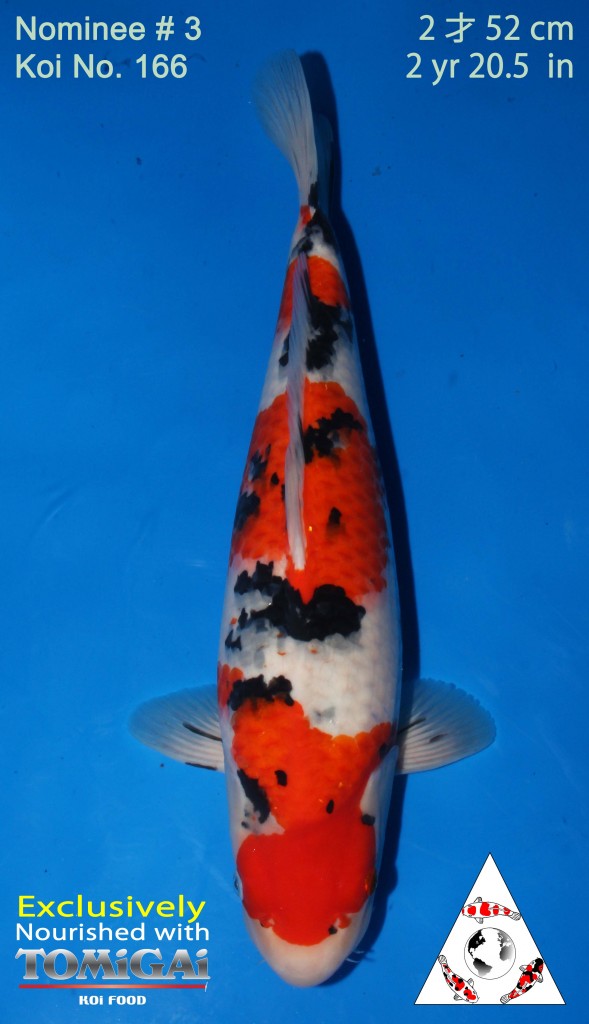 We did the same thing for this pond as we did in Pond 1.  Here are the nominees from the unsold Koi. 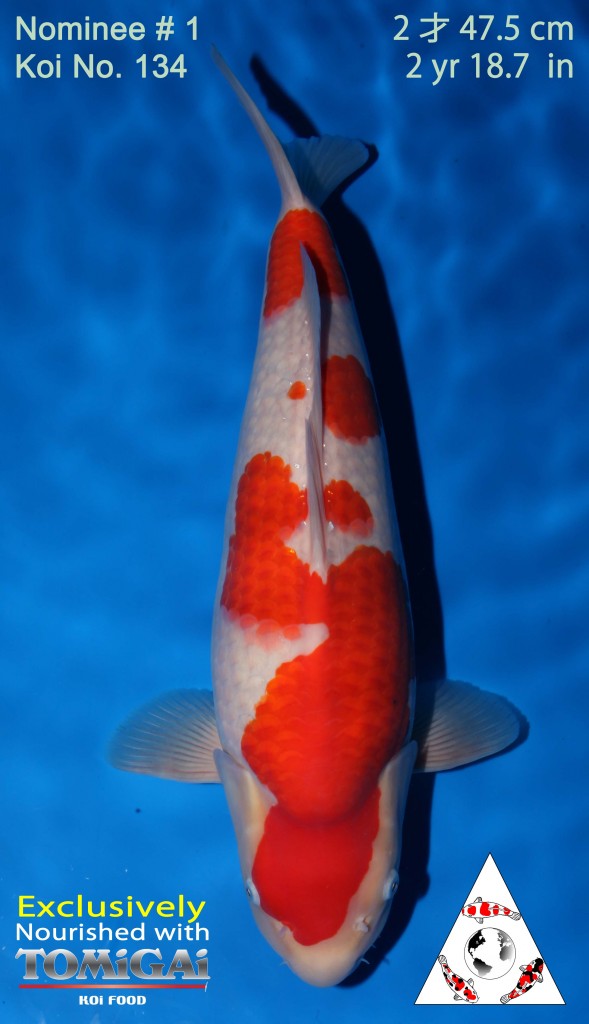 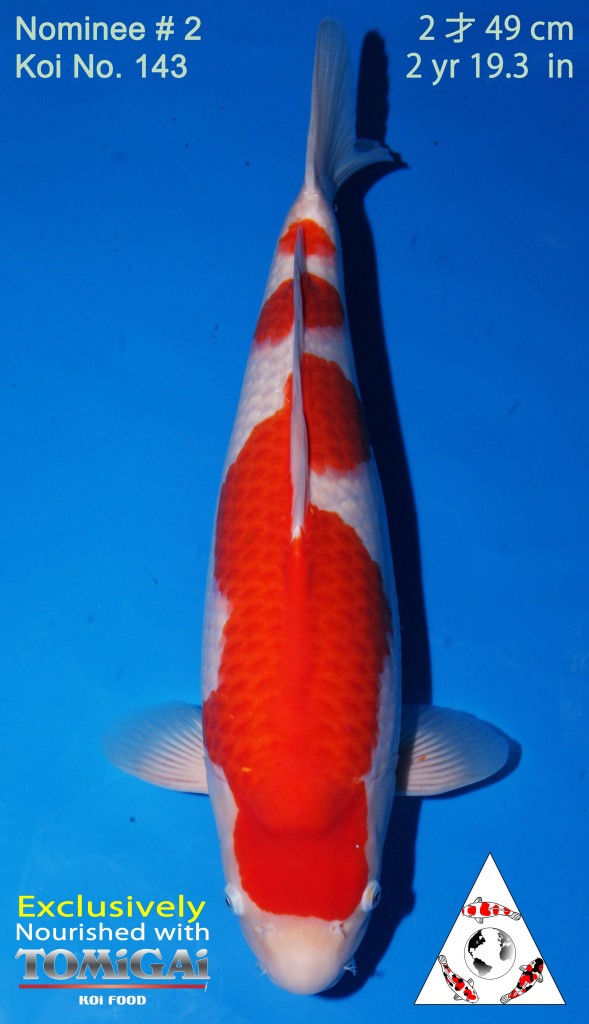 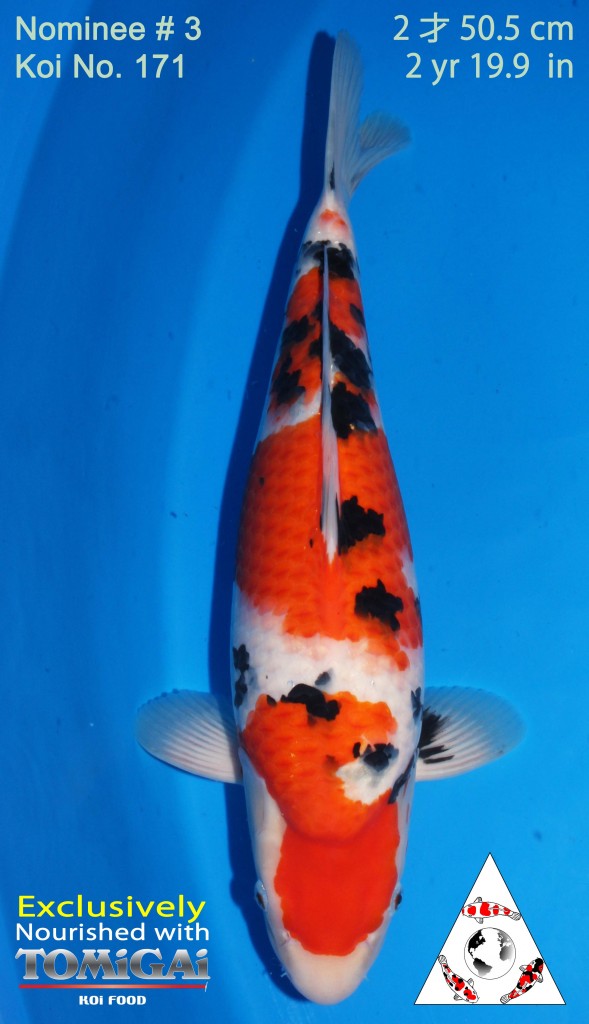 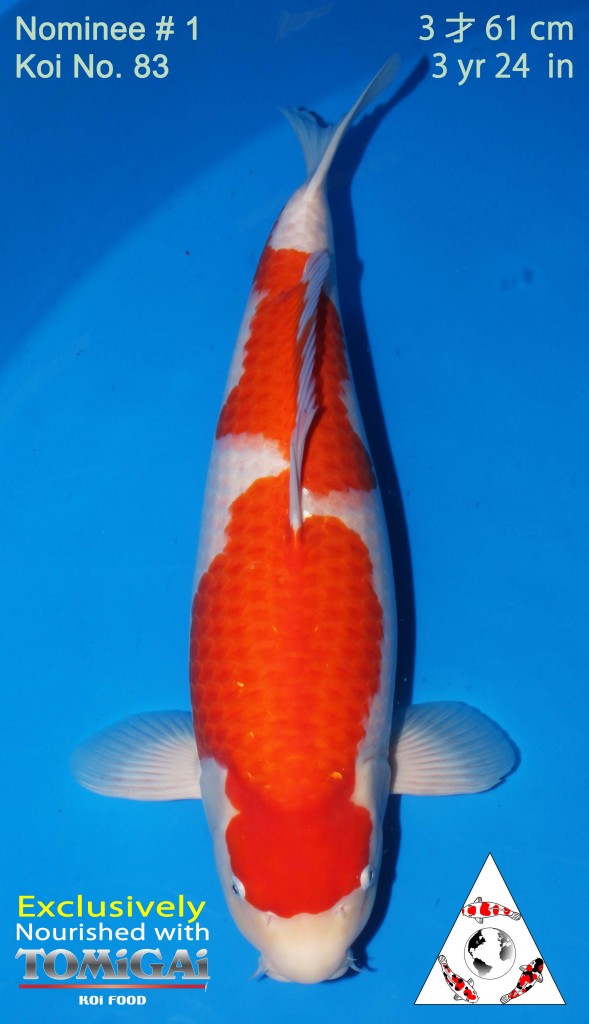 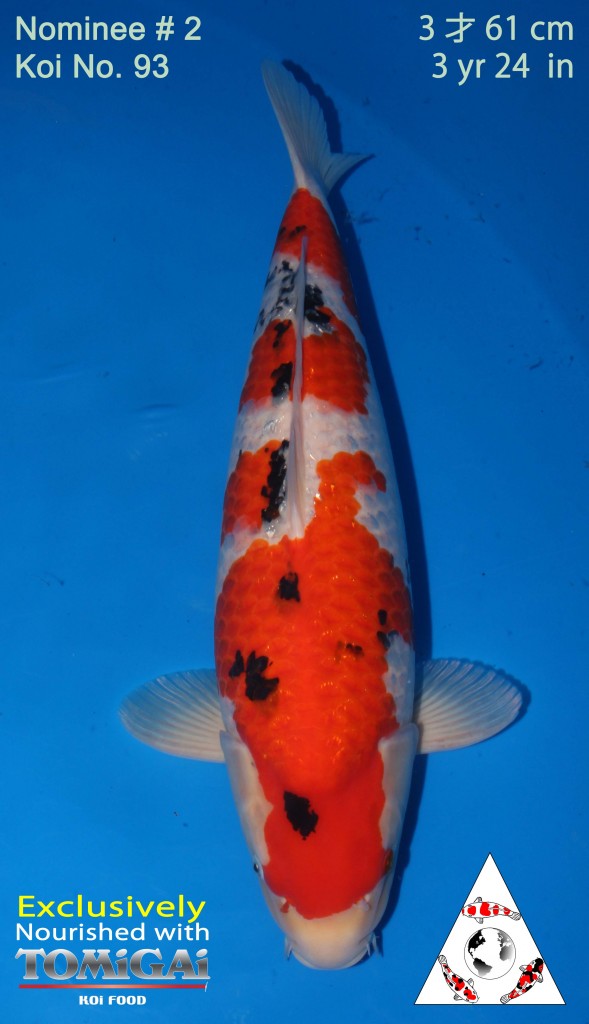 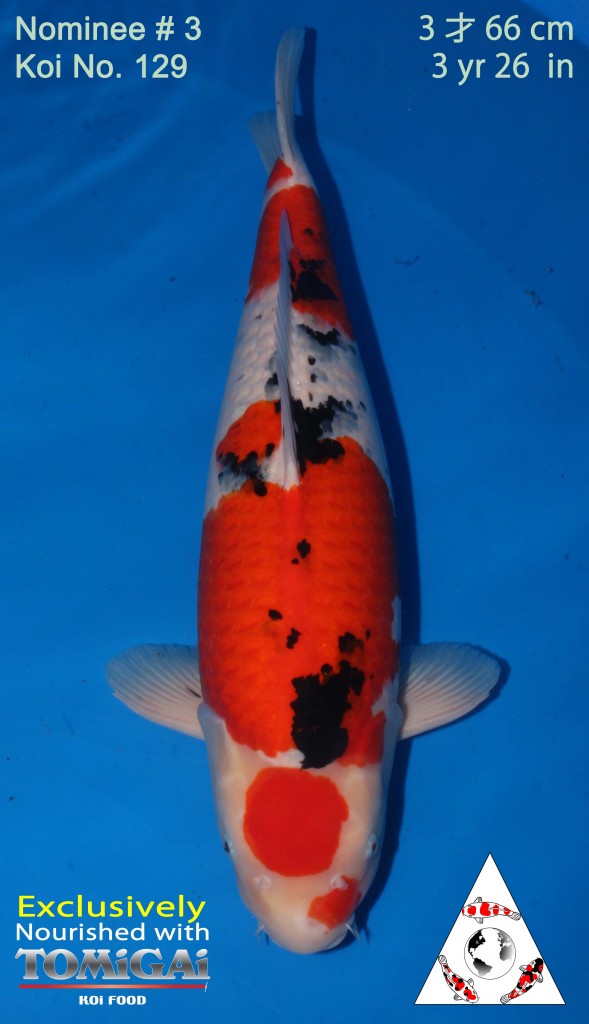 And Finally, the Nominees from Pond 7.

These girls are the Koi Devin considers to be the current top 3 Koi in all of Koi Acres. These are his crowning jewels and rightfully so. Each one of them is a Grand Champion and I am proud of each and every one of them.  There are still many other Koi that could possibly compete with these top three in the future, but these are the best Koi from the lot that are ready to show. 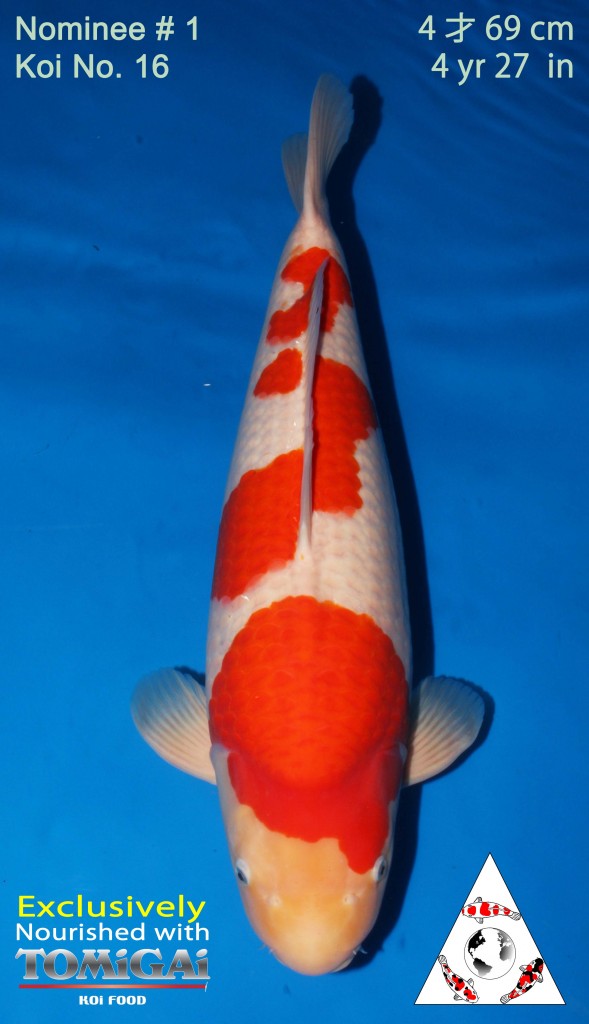 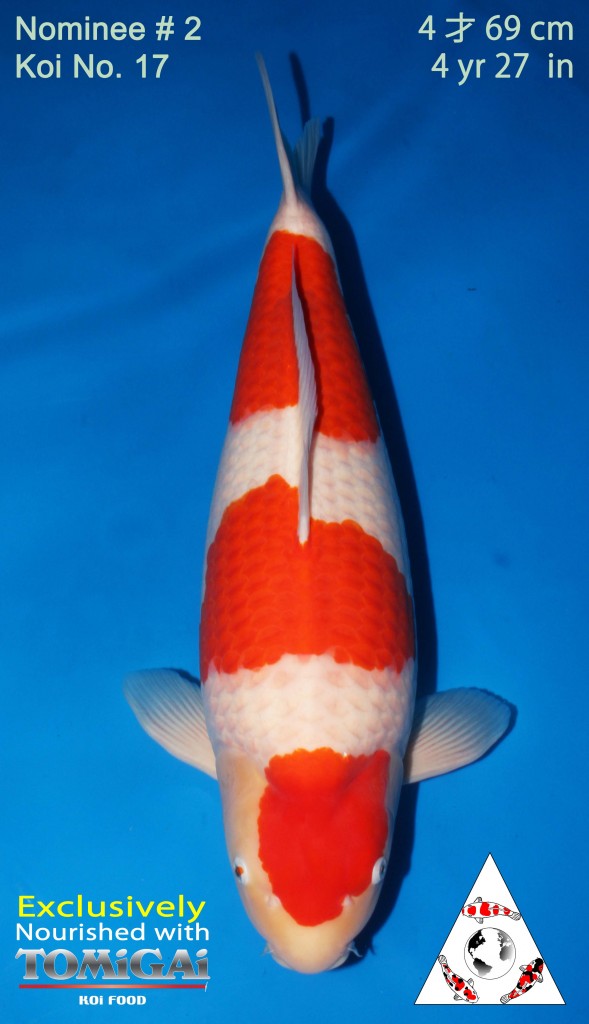 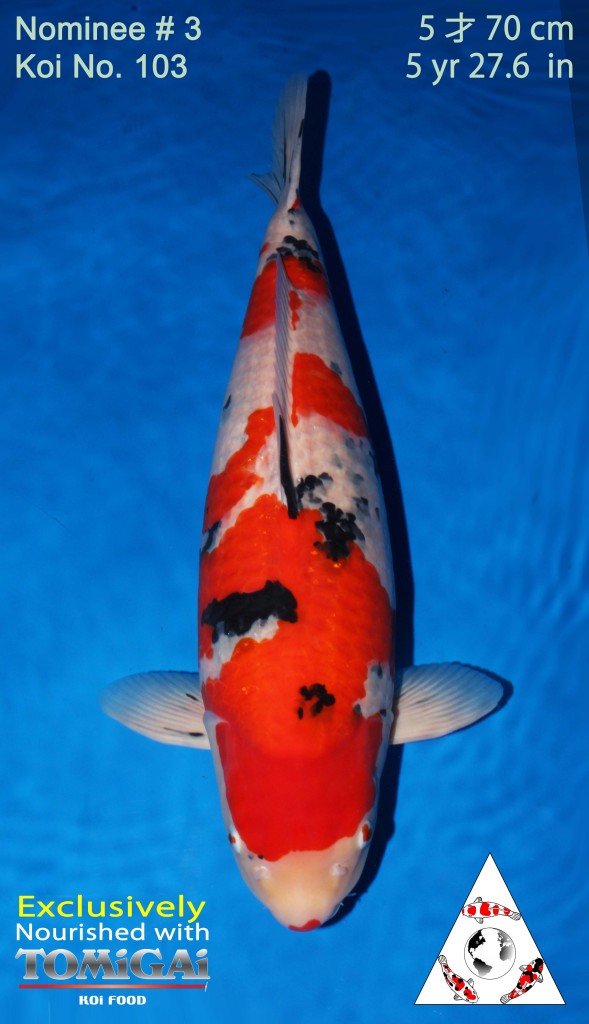 Can you guess how the judges ranked all Koi per pond?  The Koi are all presented in no particular order.  The results as judged by our esteemed judges (and one “guest” judge! lol)  will be posted day after tomorrow since most people will be able to read this post tomorrow.  I want to give everyone a chance to see the Koi before I rank everything.  Judging Koi from photos is really not the ideal way to study fish since photos are really only a loose translation of what these Koi really look like.

When we judged the Koi, we did it per pond and only the First place Koi from each pond competed against each other to get the Grand Champion Trophy ( A 40 lb Bag of TOMiGAi Tategoi!) to take home with them in addition to their Koi Show Kit.

I think a lot of hobbyists had fun seeing a different style of judging Koi.  In fact we had so much fun doing this that I think i managed to convince Devin to allow me to do something for Koi Acres that I’ve been begging him to let me do for a few years now! I won’t spoil the fun, but I will leave everyone with this: Koi Acres and TOMiGAi Koi Food has some exciting events coming up soon!  We expect to make an announcement sometime in the winter to keep those winter blues at bay.

This was a great success not only for Koi Acres, but for TOMiGAi Koi Food as well.  The Koi Food of choice for the past four years at Koi Acres has been exclusively TOMiGAi, and this harvest is a testament to the potential that our food can bring out in your Koi.  We are equally proud of the Koi that was harvested and we are very grateful to Koi Acres and all the hobbyists who have trusted and believed in TOMiGAi Koi Food to nourish their Koi.

Before I log off, I need express my gratitude to everyone.

Thank you so much to everyone who attended, and most especially to everyone who helped out!  I wanna send out a special thanks to Bill and Maureen McGurk (from Purdin Koi Farm) who took time in between their harvests to help out at Koi Acres.  You were such a big help and your Koi handling skills were so much appreciated this past weekend.  Also thank you to Shawn McHenry, who sneaked in a trip to Minnesota right before flying off to Japan for the Fall Harvests there! Literally his flight to Japan from LAX was the day right after he returned to California after the Koi Acres harvest.  We were so happy you could join us this weekend.  Of course we cannot forget to thank Shohei Takatsu who surprised us last month when he said he would like to come out to help harvest the mud ponds.  He landed from Japan on the Wednesday before the harvest and despite still being jet-lagged, his typical Japanese-style work ethic never ceases to amaze.  A big thanks goes out to Tony Geraldi as well who has never failed help out at every event at Koi Acres.  And last but not least, thank you very much to my dad, Michael Hernandez, who has supported Devin and Koi Acres since we first met.  I could not have asked for a more wonderful father and Devin is equally grateful to have such a supportive father-in-law.  We love you very much!

To all the hobbyists who came out and joined us for the harvest as well as to those who were unable to join us but are currently boarding Koi at Koi Acres, thank you so much for helping to make the weekend such a success!  Special shout out to the hobbyists who came out for the first time this year: Tony and Diane Malone, Dick and Brenda Thomas, Claud and Diane Head, Troy Head (no relation to the former, lol.), Mike Pfeffer and Jason Steinhoff.  We hope you had as much fun as we did!

Without all of you, Koi Acres would not be where it is today and we are all very grateful for the faith and trust you have placed both in Koi Acres and in TOMiGAi Koi Food.