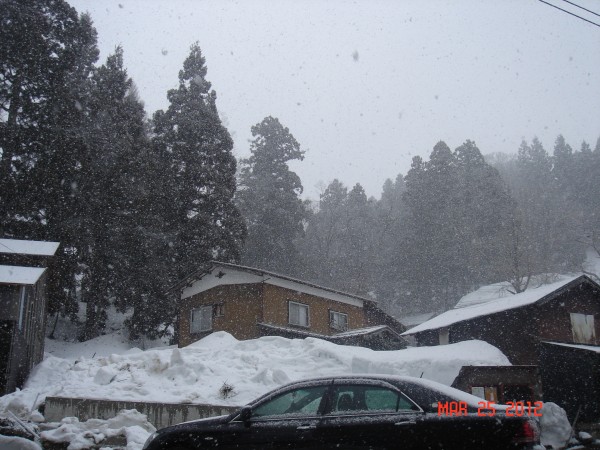 It’s beautiful in Niigata now, and constantly snowing!  Devin said it was rather strange for it to be snowing this much at this time of the year, but we had such a dry winter in Minnesota that I’m rather enjoying the snow.  The amount of snow here is quite incredible, though!

Yesterday we visited Teruyuki from Marusaka Koi Farm.  He is unable to work lately because of a ski accident that left him with a broken pelvis and hand, and it seems it will be about another couple of weeks before he is able to return to Koi farming.  Thankfully, though, it was his pelvis and not his back that was injured as that would put him permanently out of work.  Because of his injury, we mostly spent the afternoon catching up on things other than Koi, but later in the week, Teruyuki promised he would show us his beautiful Koi.

While having afternoon tea with Teruyuki, his longtime girlfriend Aya, arrived to pay him a visit. She is the sweetest thing ever! She was very shy at first, but she eventually warmed up as we began “girl talking”.  What I love about visiting different farms in Japan is the incredible warmth that you receive at each place you go.  I honestly have no idea how they all stay so skinny as it seems there is an endless supply of sweets in each household!  Every place we have thus far visited have greeted us with this: 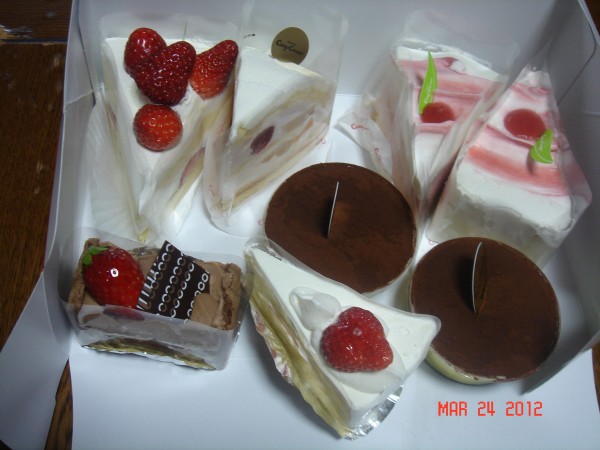 And you know what? The cake tastes even better than it looks! 😉 oisshiiiiiiii!!!!!

The television was also turned on in the room, and the finals for Sumo wrestling was being featured.  I find sumo wrestling to be such an interesting sport! I never appreciated it until I took the time to sit down and watch an actual match. There are so many intricacies, ranking, ceremony and what not involved in it that I simply could not get enough.  Surprisingly, sumo is not only popular in Japan, but also in other parts of the world as there are quite a few gaijin sumo wrestlers in the major leagues. 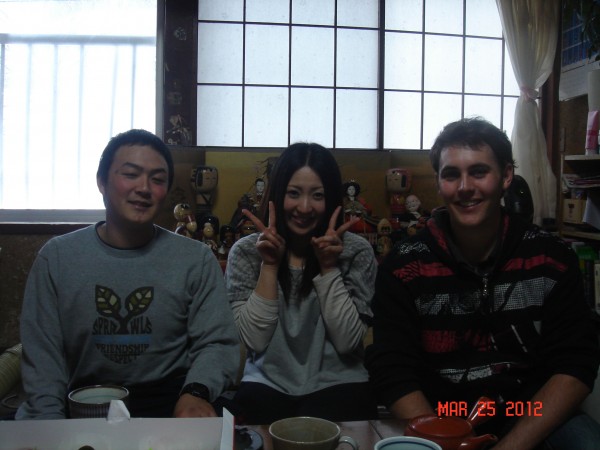 After Marusaka Koi Farm, we headed out to Otsuka Koi Farm and this time I got to see some Koi.  Koi is such a beautiful art form that is continuously growing and developing.  Each year, the Koi not only grow just a little bit more in length and girth, but the number of varieties being produced is also growing just as much!  Can anyone guess what kind of variety this Koi is? 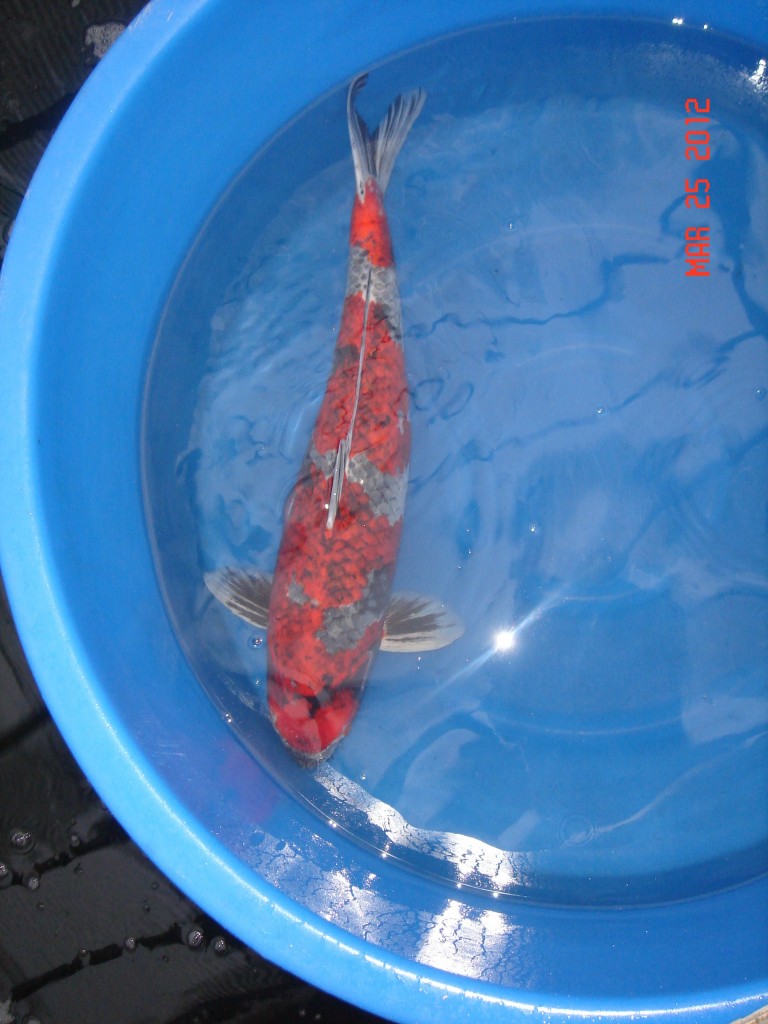 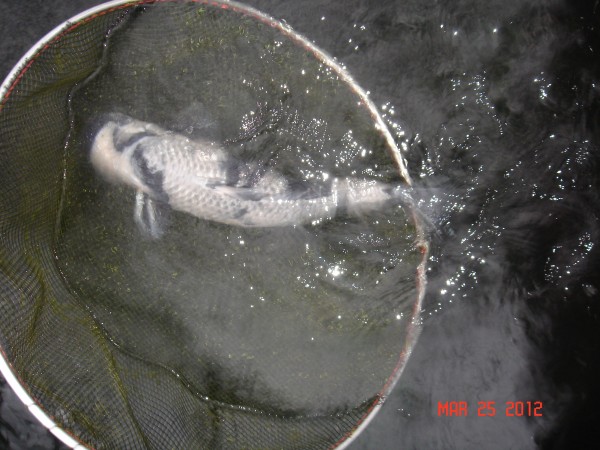 The first Koi is a Goshiki Showa, and the second one, which is something that I would personally like to keep in my own pond, is called a Kage Shiro Utsuri.  I want one! (I must apologize for the poor quality of photos… I didn’t want to stress out the fish too much) 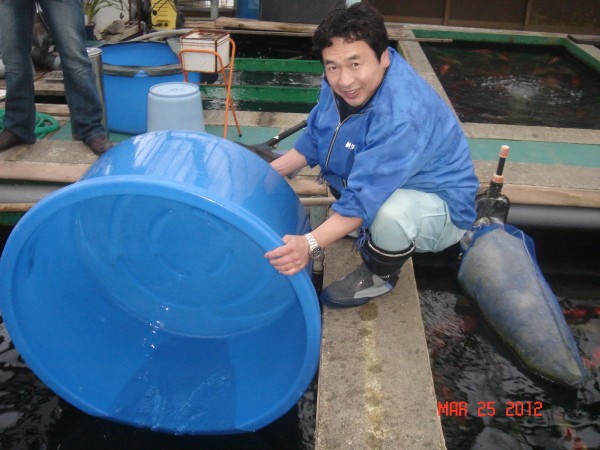 Otsuka san was so kind as to net me these interesting Koi, and even bowl the Goshiki Showa for me.  I truly appreciated it, and I was completely fascinated with the marriage of both the unusual and beautiful in Koi.

My father, Michael Hernandez, has just e-mailed me photos of the Barstow Koi Farm/Mystic Koi Mud Pond Pull and it seems everyone had a grand time.  I’m sorry I missed it, but Devin and I will definitely be in California to see all the Koi harvested in person! 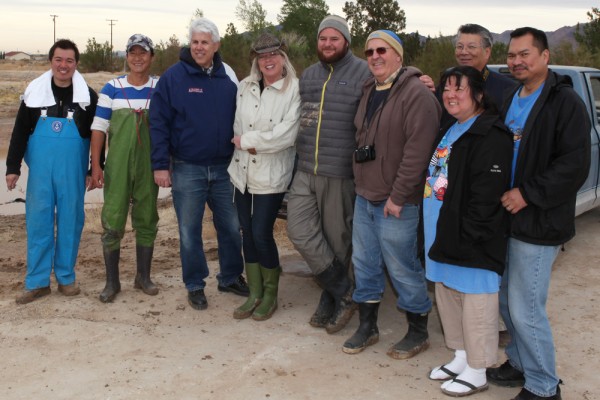 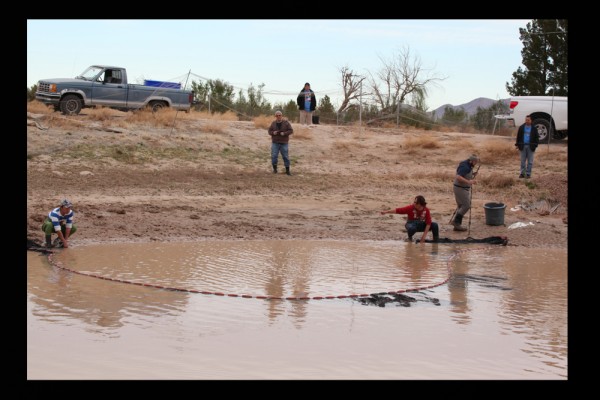 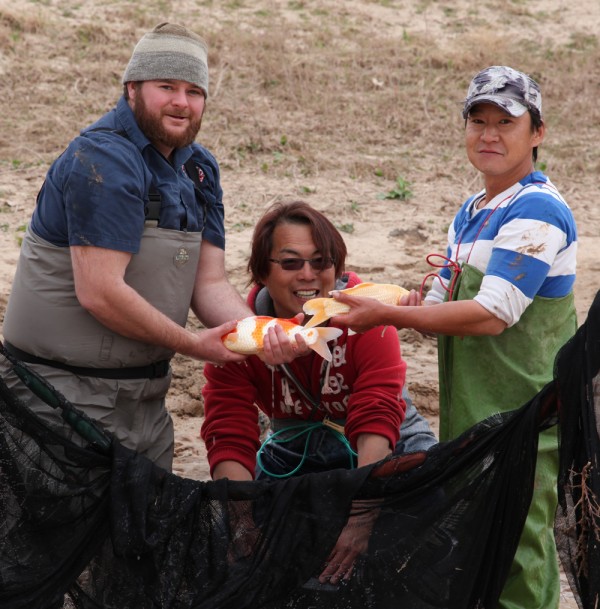 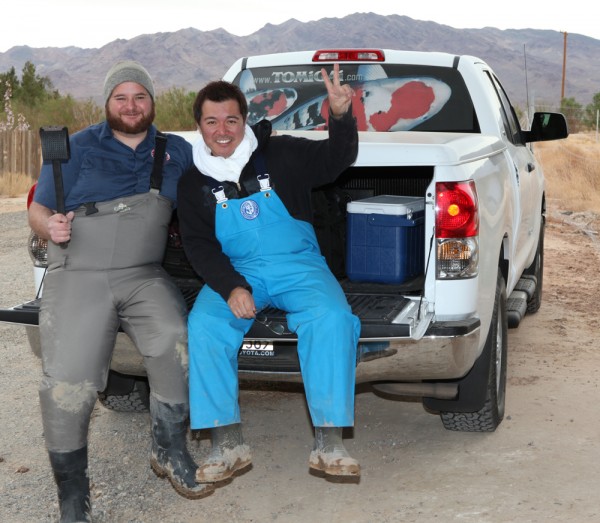 Today we went to Kanno Koi Farm and in a little while we will be heading to Isa Koi Farm.  Devin is just doing our laundry while I work! 😉 (I should go make sure he hasn’t shrunk all our clothes!)

I will update again either tonight or tomorrow to share with you the events of today. I’m quite excited to tell you about it, as it seems to be that today is ikemen day! Both Kazuhiro-kun and Mitsunori-san are quite good-looking that to visit even just for a photo is worth the trip! 😉