Warm Up Before Manila

By definition, Summer literally translates to a season of warmer weather that can host some of a year’s warmest days.  Today the Dallas Koi Kichi Show began the benching process for their Koi Show this weekend.  Looks like they picked the perfect day to work with water: it was 105 degrees out today! I won’t lie: despite being tropical born, it is sometimes quite difficult to keep oneself together at temperatures and humidity levels such as today.  Oh well, it might help me adjust better to the Manila weather that I’m expecting to experience in a few days!

Devin and I took the first flight out this morning, and despite a good amount of delays, we finally made it to the Bass Pro Shops where the Dallas Koi Show is being held. 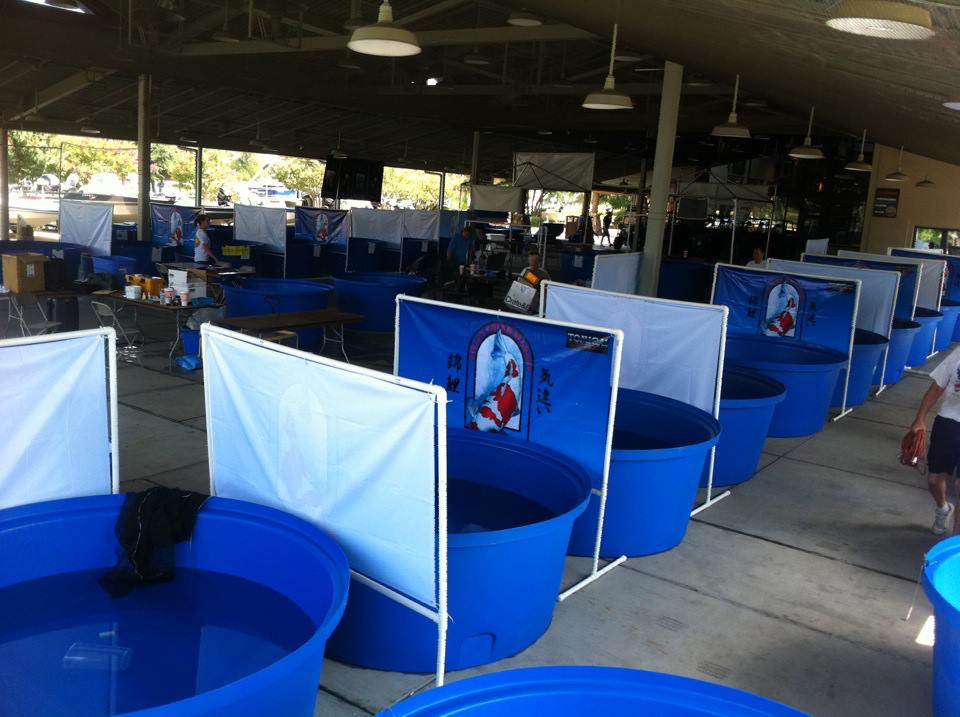 Doesn’t that look awesome!?  Last year we donated some TOMiGAi Splash Guard banners to the ZNA Potomac Koi Club Show, and this year we sent some over to the Dallas Koi Kichi Group.  It turned out sooo pretty! And my favorite part was the “Wall-Of-Champions” ala All-Japan Koi Show Style that was hanging on the opposite side of the show site from the Koi Acres *cough* tomigai!*cough* booth.

When Devin and I arrived at the site, I saw my dad talking with Bill and Maureen from Purdin Koi Farm.  I sneaked behind the boats so that he wouldn’t see me, and jumped up behind him to greet Papa! lol.. It’s been a while since I saw my dad (over two months?) and I did feel kinda guilty for being so short with him over the past few days.

As some might know, the recent years have seen me graduate from a database programmer newbie to a full fledged programing nut.  I’m not even in the same league as the real programmers, but for someone who is completely self-taught, I’m quite proud of my accomplishments.  Every year since I ran my first database in 2011 for the Philippine Koi Show / Kois & Ponds Cup in the Philippines, I have been building a new database year after year, scrapping each and every one of them in favor of a more complicated (and hopefully better built) Koi Show Database Program.  Today, my obsession with database design has brought me to a new high: I helped Jason Wong bench the Koi at the Koi Show!

When Jason Wong showed up this afternoon at the Koi Show without is wife, May, who traditionally runs the database organization for the club’s show, everyone was thrown in a panic.  At this point, I was just chatting away (like I normally do) with Maureen and Bill (who can resist their company!?), completely oblivious to the situation.  at the last minute, something had come up and May said she would be unable to attend the show and gave Jason instructions on how to run the program.  There are several intricacies involved in judging a Koi show, mostly due to the fact that you look at Koi based on a number of different classifications (divided up by sizes and varieties), and running a Koi show without properly being able to filter and process all the data would have been, uhm, very interesting.

The thought passed their heads that they would run the show like it had been run before all the fancy computers and programs to do things at the click of a button: everything done manually.   Now I’m not going to lie; I’ve never seen a show run like this and it would have been something that I think I might have enjoyed.  But when my dad heard that they were considering this, he suggested that perhaps I could take a look at the program first and see if I could do something with it.

After a few minutes of hiccups and “opsie”s, I managed to get a foothold of the program and in no time at all, I was having so much fun entering all the Koi Data!  When we finished benching the Koi for the day, Jason and John was thanking me for helping them out at the database today, but in reality, it is I who should be thanking them.  Call me a geek, but I just love working with computer data! 😉

Because I was so busy with the database today, I was completely unable to take adequate video footage.  Hopefully I could persuade my dad to take over my video-ing responsibilities for the weekend.  I’m having too much fun working at the show!