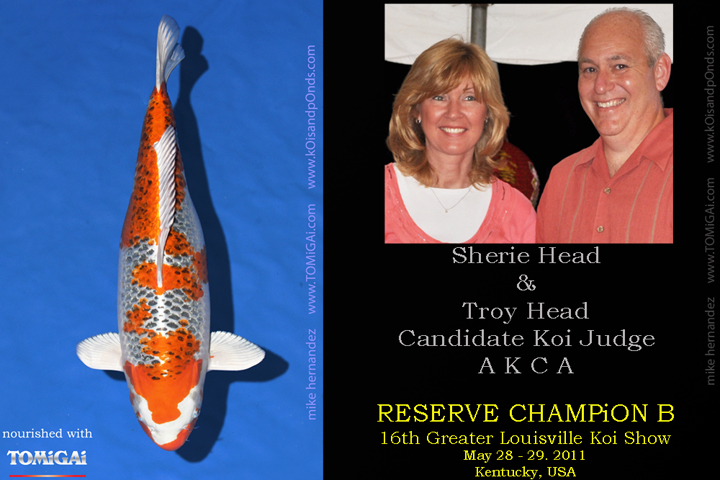 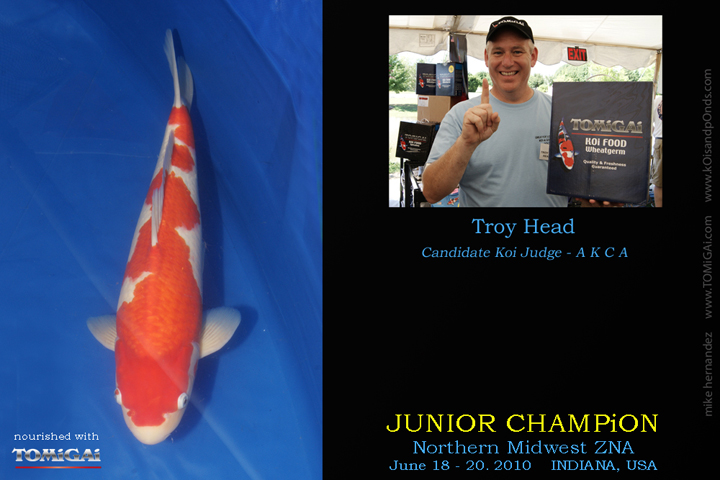 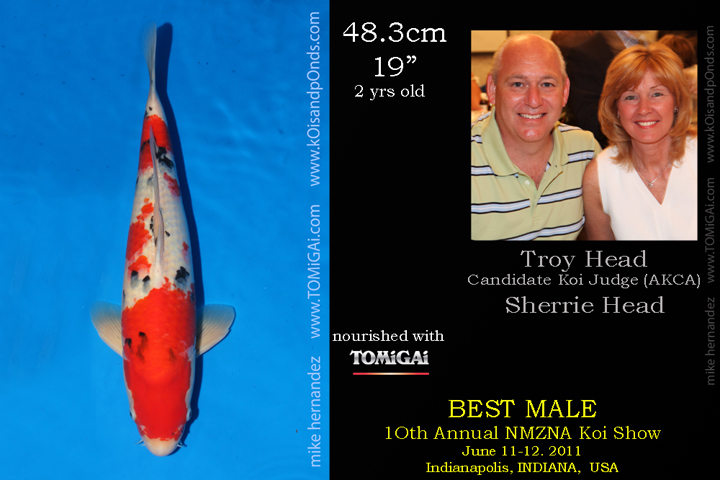 Troy on his Grand Champion Kujaku: 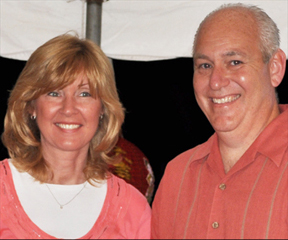 What we’ve done with her, I purchased her as a two-year-old. We placed her in the [mud] pond as a three-year old [and] gained a few inches on her. Last year we placed her back in the mud pond. We changed some things; we’ve added an air blower to the pond. We’ve also added and auto feeder, and we’ve added TOMiGAi Koi Food, which we are feeding six times a day…all of those combination of things really helped her in her development in her fourth year. We’re not changing a thing in our fifth year of our mud pond. What we’ll be doing is providing TOMiGAi Koi Food again with the auto feeder, and I’m expecting very similar results.
The sheen on it, she’s outstanding.  She has one of the cleanest heads for a Kujaku [that’s all] you can ever wish for.  The white is almost blinding.  Again, the [pectoral] fins, you could see the sheen on those.

Not only did she grow, which we all want in our fish, but the volume of her frame.  Her body is just night and day….Some would say, “well, she’s developing too quick.”  I don’t think so.  I’m expecting, like I said, the same level of growth as I did last year and I’m hoping that she’ll be pushing close to thirty inches by the end of summer.

She’s still developing the matsuba scaling that you would hope for.  As she gets a little buit older, I think that would thicken up.  Again, I think it has to do with all the things that we are doing: she’s got plenty of space to grow, and she’s being fed on a regular basis on a very high quality food.

Last year was the first year that we didn’t choose a blend of food products.  Last year was the first year that we used exclusively TOMiGAi Food.  We did use a variety of their foods, but the same food line.  Again, just from the results that we had seen in the previous years on fish compared to hwat we saw last year, the only thing we’ve done different is the food, and so we just feel that [it’s] a key ingredient on the success we had last year and the success we’re going to have again this year.

You can never replace water changes, but I am a big believer in nutrition.  Besides the water changes, I feed on a regular basis a variety of TOMiGAi Koi Foods and I recommend you do the same.