It’s been a crazy few weeks and I am now back home in Minnesota from Manila for a little while, which makes a Mr. Swanson quite happy. I heard he had been missing me quite a bit while I was gone.  I was glad to have been able to go with him to Dallas before I left so that I got to spend some time with him.

Speaking of Dallas, I haven’t been able to update everyone on the results from the show: Congratulations to Tom and Jennifer Walker who won the Supreme Grand Champion at the 2013 Dallas Koi Kichi Group! Yay! My dad made a cute little collage for them: 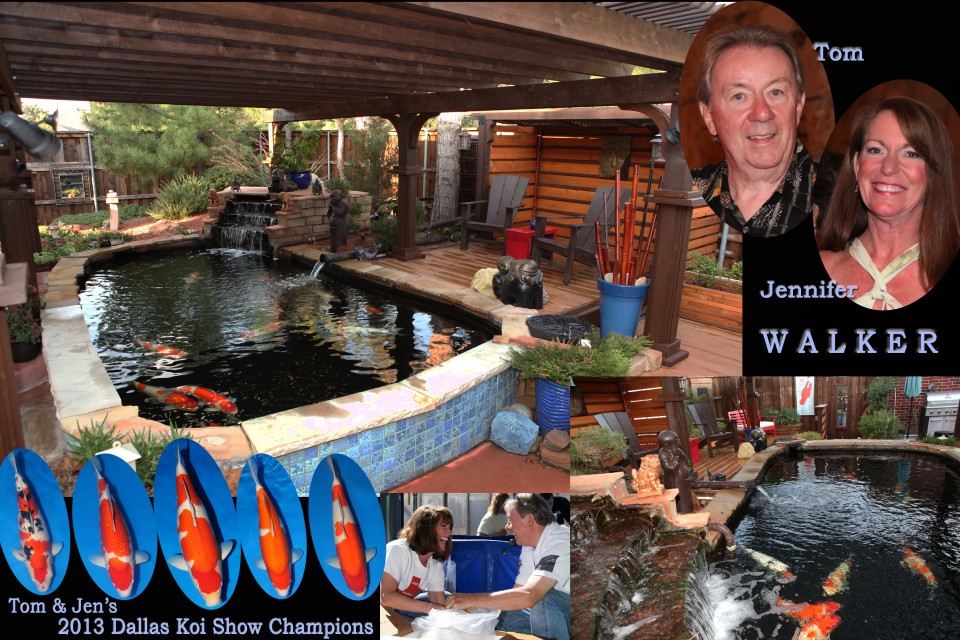 Another one to go up on the wall of Champions! 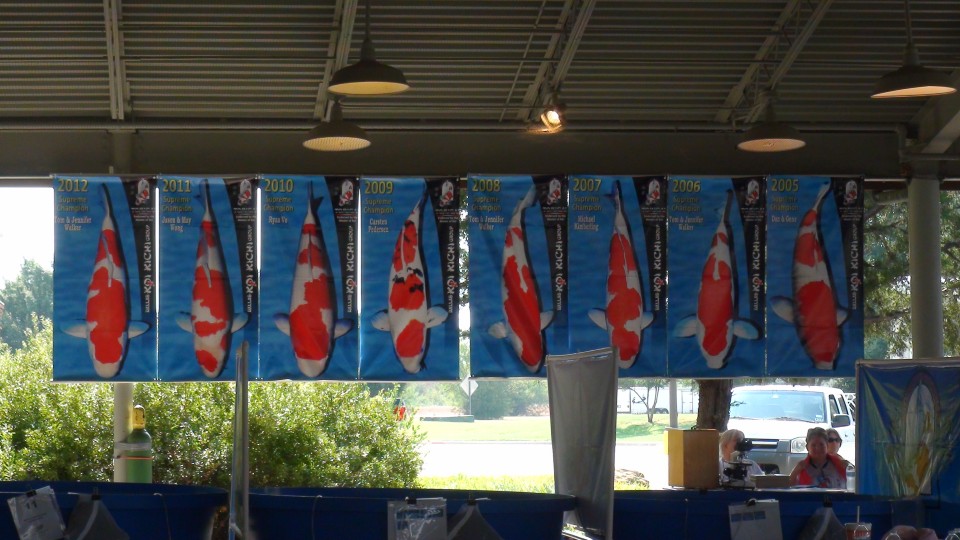 A big big congratulations to Tom and Jennifer Walker! But I do have to say that I think Tom wins the Grand Champion Trophy everyday he wakes up next to his beautiful wife.

Folks, in the next few weeks I will be revealing to the world something quite rare and unprecedented: a lengthy interview with Carsten Pederson! The notoriously shy but incredibly talented Koi Keeper from Texas allowed us to film an interview with him on his thoughts on Koi and the hobby.  We were very pleasantly surprised at how much material he gave us and what great insights he had shared about Koi keeping that I’m so excited to share it with everyone! 🙂  He will be featured on our website as a “Hobbyist’s Spotlight” feature, so watch out for that!

On the last day of the Dallas Koi show, I got to meet Dan and Gene, who had in the past won a number of Grand Champion awards with their Koi.  They have since then retired from showing Koi, choosing instead to enjoy their fishes from the comfort of their home.  Devin and I received an invitation to join them for dinner at their house on Sunday night after pack up together with Bill and Maureen McGurk (future versions of Devin and Mikki..lol).  When we arrived at their home, a beautiful rock-and-bamboo garden greeted us at the gate which was both so simple yet so elegant.  Upon entering the house, we were greeted with a floor to ceiling glass wall that presented the most serene view of their pool and cabana that was situated in between their two ponds.  I quickly turned to Devin and said, “I want that in our house too!”, to which the unfortunate reply was, “Not in Minnesota, you’re not!”. Oh well….  Naturally the first thing we wanted to see was their pond and Koi, which was equal, if not greater, in majesty as their impressive home.  These days, they have chosen to purchase exclusively Purdin Koi Farm Koi and while they still have a number of Japanese-bred Koi, the quality of all the fish in their pond one that any Koi Keeper-hobbyist and dealer alike- would envy. It is a great loss that they no longer show their Koi because the skill and eye for Koi that their pond boasts is something that both Devin and I greatly admired in them.

We had an incredible time at Dan and Gene’s beautiful home, I’m only sorry that I had forgotten to bring my camera to share photos with everyone.

I had talked to Tom and Jennifer if it was alright to come visit their home for an interview because we wanted to feature them on our “hobbyist’s spotlight” as well as to interview them on the Grand Champion Fish.  When my dad first interview Jennifer (because Tom is surprisingly camera-shy), we were all amazed at how naturally she took to the camera.  The ease and grace with which Jennifer handles herself on and off screen leaves many Hollywood actresses wanting to exude the same presence that so naturally comes to her.  Tom and Jennifer showed us around their home even showed me a picture history of the pond while it was being built.  It was my first time to visit their home and view their pond, and the impression that it gave me was a deeper understanding of why they had such beautiful fish.  Both Tom and Jennifer have such a deep passion and love for their fish and it was very evident in the all the Koi and it is  these kinds of hobbyists that both inspire and motivate professionals such and Devin and myself in the Koi industry.

Before I say goodbye, I have one very important and wonderful news to share with everyone, especially to the TOMiGAi Hobbyists in Texas.  (Drumroll please…)  May I Present, the newest member of the TOMiGAi Retailer’s Family… John Ames from Minami Koi! 🙂 It was during the Dallas Koi Show weekend that John finally took the plunge and began operations on Minami Koi, which he had registered and established a year prior.  Congratulations, John! We look forward to seeing you grow as part of our TOMiGAi Family!

Just so that I won’t bombared everyone with a super lengthy post, I’ll continue tomorrow with an update on how the Kois & Ponds 6th Grow Out Contest turned out. It was so much fun and I’m so excited to share the experience with everyone tomorrow! 🙂  Till then, ja mata ashita, ne~ 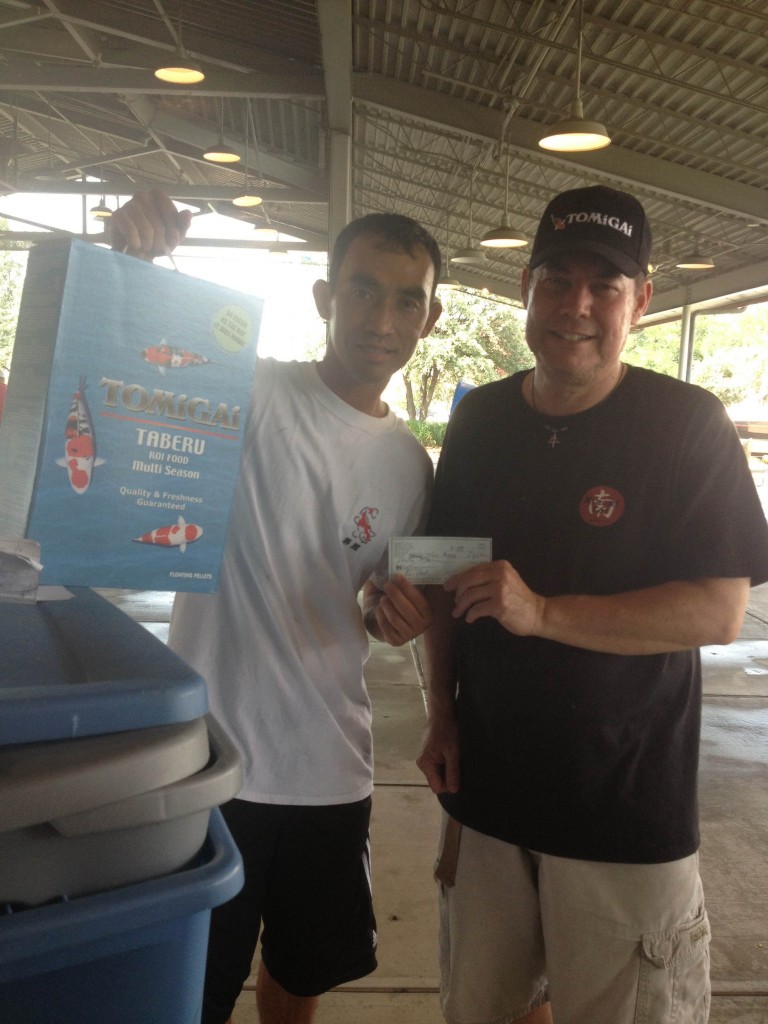